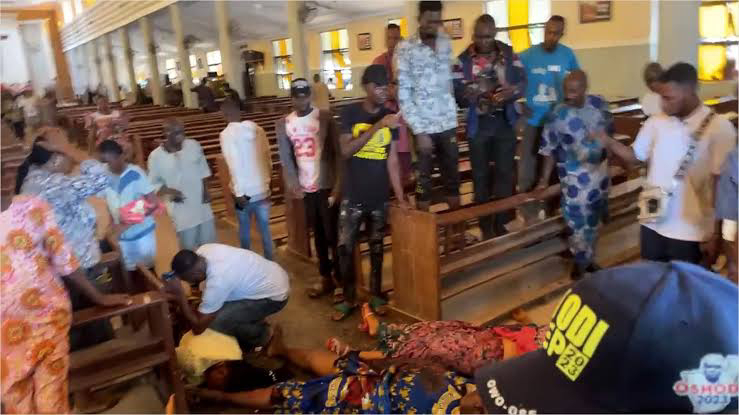 There was pandemonium at Saint Francis Catholic Church, Owa-luwa Street, Owo,  the headquarters of the Owo Local Government Area of Ondo State as gunmen attacked the church on Sunday.

The attack on the church in Owo,  the hometown of the state Governor, Rotimi Akeredolu, came barely a week after the Prelate of the Methodist Church of Nigeria, Bishop Samuel Kanu-Uche, was kidnapped in Abia State by gunmen the priest later identified as Fulani youths.

It was learnt the gunmen, who attacked the Catholic church, arrived at the premises, which is less than 200 metres from the palace of the Olowo of Owo, at 12pm when the Sunday mass was being rounded off.

Reports say worshippers, mostly children and women, were killed in the attack, by gunmen, who were said to have thrown an improvised explosive device before they started shooting sporadically.

A 37-second video posted online showed some of the slain worshippers in a pool of blood.

Workers of the Federal Medical Centre and Saint Louis Hospital, both in Owo, where the dead and the injured were taken to, told a Punch correspondent that a total of 35 people were brought in dead.

Both Reuters and Voice of America reported on Sunday that over 50 people were killed in the attack.

However, a resident of the area, who identified himself as Olabamiji, said the attack was carried out by gunmen who disguised as worshippers before entering the church’s premises.

According to him, immediately they entered the church premises, they threw an IED before shooting the congregants.

He said, “We saw them.  They didn’t cover their faces. Initially, we thought that they were going into the church for the service, not knowing that they were gunmen. Suddenly, we heard gunshots.  They directed the gun at everyone, particularly women and children.

“While the attack lasted, we did not see any security operative to confront the gunmen. We could not even count their number because everybody had to run for safety.”

One of the survivors, who identified herself as Mary Williams, in an interview with the Punch, said she narrowly escaped the attack.

Williams said she attended the service but was outside when the attackers arrived and started shooting sporadically,  killing many worshippers.

“The mass ended and I got out to be going home. I was beside the fence of the church when suddenly I heard those sporadic gunshots. Initially, I thought they were armed robbers trying to rob somebody but I later discovered that the heavy sounds of gunshots were inside the church.

“I jumped into a gutter where I hid. It was like we were on a war front the way the gunmen were shooting for about 15minutes. My legs were injured and  I was taken to the hospital and discharged.”

The officiating priest at the church, Reverend Father Andrew Abayomi, said the attackers stormed the church when the mass was almost ended.

Abayomi said, “We were about to round off the service. I had even asked people to start leaving when we started hearing gunshots from different angles.

“We hid inside the church, but some people had left when the attack happened. We locked ourselves in the church for 20 minutes. When we heard that they had left, we opened the church and rushed victims to hospitals.”

A health worker on duty at the FMC, Owo,  said over 50 people were brought to the hospital, adding that some were dead already while some were still alive.

He said, “They are still bringing people to the hospital; some have been confirmed dead, while some are still breathing.”

A nurse at St. Louis Hospital, Owo, who spoke on condition of anonymity, said many casualties were brought to the hospital.

She said, “A lot of casualties have been brought here, but I can count 12 now that have died. We are still trying to save the lives of the remaining.”

At the FMC Owo,  many people were seen crying as they did not know the fate of their relatives who were receiving treatment at the Emergency Department of the hospital.