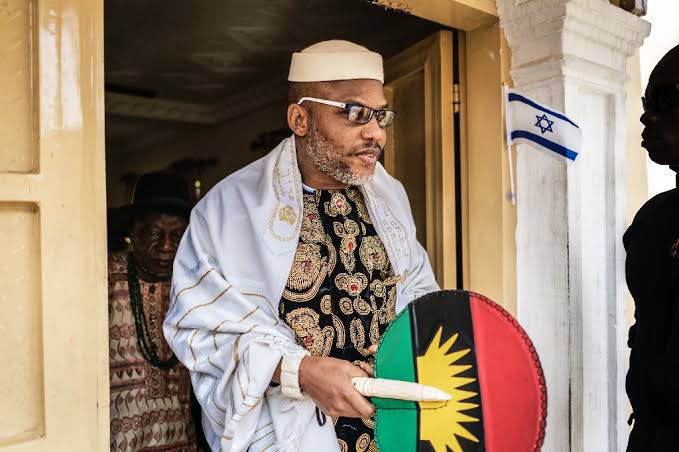 The leader of the Indigenous People of Biafra, Nnamdi Kanu, has dragged the Federal Government to the Court of Appeal to challenge the amended seven charges on terrorism granted by Justice Binta Nyako of a Federal High Court in Abuja.

A copy of the court processes was obtained by journalists in Abuja on Monday.

It would be recalled that Justice Nyako had struck out eight out of the 15-count treasonable felony charge filed against Kanu by the Federal Government.

The striking out of counts 6,7,9,10,11,12,13 and 14 of the charge followed an application Kanu filed to quash the entire charge against him.

Kanu had in the application he filed through his team of lawyers, Mike Ozekhome (SAN) and Ifeanyi Ejiofor, maintained that the charge against him was legally defective.

He had argued that the court lacked the jurisdiction to try him on the strength of an incompetent charge.

Ozekhome had told the court that his client was “unlawfully, brutally and extraordinarily renditioned from Kenya without his consent”.

He had argued that since some of the allegations leveled against Kanu, were purportedly committed outside the country, the court, therefore, lacked the jurisdiction to entertain the charge.

“The charges appears to give this court a global jurisdiction over offences that were allegedly committed by the defendant, without specifying the location or date the said offences were committed”, he had said.

He argued that under the Federal High Court Act, such charge must disclose specific location where the offence was committed.

However, lawyer to the Federal Government, Shuaibu Labaran, had prayed the court to strike out Kanu’s application and order the prosecution to open its defence.

He argued that the application would touch the substance of the case that is yet to be heard.

But Kanu in the suit at the Abuja Division of the Court of Appeal filed by Ozekhome and Ejiofor, said the the trial Judge erred in law by failing to “consider, make finding of facts and accordingly pronounce on issue one raised for the trial court’s determination, relating to the extraordinary rendition of the appellant, and thereby occasioned a miscarriage of justice.”

Among the reliefs being sought-after in the appellate court included, “an order of this Honourable court allowing the appeal and setting aside in its entirety, the ruling/final decision of the learned trial court, retaining counts 1, 2, 3, 4, 5, 8 and 15 of the amended charge.

“An order of this Honourable court upon granting relief a above, dismissing the remaining counts 1, 2, 3, 4, 5, 8 and 15 and, accordingly discharging the appellant on those counts.

“An order of this Honourable court terminating the entire charge and discharging the appellant.

“And for such further order or orders as the Honourable court may deem fit to make in the circumstances of this appeal.”