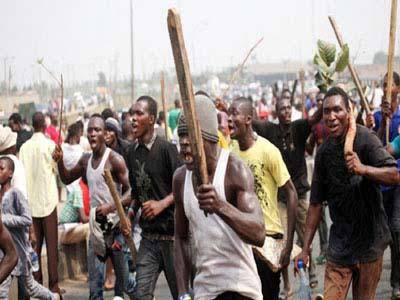 An Enugu-based civil society organisation, Community Centre for Justice and Health Initiative, has joined in the condemnation of what it described as resurgence of political intolerance and thuggery in the politics of Enugu State, saying it portends grave danger for the state ahead of the 2023 general election and beyond.
The condemnation came on Monday through a statement by the Executive Director of the Centre, Dr. Chinweuba Onah.
Recall that the campaign organisation of a former Deputy President of the Senate and gubernatorial aspirant in Enugu State, Senator Ike Ekweremadu, had during a press conference in Enugu at the weekend, alleged series of attacks on the lawmaker’s supporters and political associates, such as during the 9th April 2022 monthly meeting of the Peoples Democratic Party (PDP) in Aninri LGA and 30th April 2022 ward congress for three man delegates across the state.
The Director-General, Ikeoha Campaign Organisation, Hon. Charles Ogbo Asogwa, had, among others, shown journalists footages of the attacks masterminded by people he described as state agents and functionaries.
But raising the alarms on the developments, Dr. Onah, a lawyer and senior lecturer in Jurisprudence and International Law,  described the resurgence of political thuggery in Enugu State as depressing and ominous for the state in the build up to the 2023 election and beyond.
“I am from Udenu in Enugu North Senatorial District. In 2021 alone, there were several attacks on meetings of Ndi Oganiru Enugu in Enugu North zone, for the mere fact that they support the governorship ambition of Senator Ekweremadu deemed by it as the best candidate.
“Over 25 thugs armed with guns and other dangerous weapons attacked and disrupted the Christmas party of Oganiru in my home at Ezimo Ward, Udenu LGA,  on 19th December 2021. They shot sporadically, beating people with sticks and horsewhips.
“About ten persons sustained various degrees of injuries. The rented sound system was fired directly at and destroyed beyond repair, while 48 plastic chairs, Toshiba laptop, among other valuables were destroyed.
"The wounded were treated at Ozalla Ezimo Comprehensive Health Center and property valued at over N2 million lost.
“I was also stabbed on the neck and beaten with gun butts. Curiously, all this happened while policemen were watching and did nothing.
“The worst was that my mother, aged about 95 years, passed out. I had managed myself to the Divisional Police Office at Obollo Afor to report the incident when my wife called to inform me that mama had died. Although she was later revived, she remains in a vegetable state till date.
"Incidentally, when I got credible intelligence that the Udenu Council Chairman, Mr. Solomon Onah, ordered attacks on Oganiru members, I called him to plead that he should call off such attacks. He denied it. But two weeks later, we were savagely attacked.
“Similar attack was visited on Oganiru meeting at Ibagwa Aka, Igboeze South LGA where the Oganiru Coordinator in the LGA, Engr. Ibe Obetta and many others were seriously brutalised.
“Meetings of the group were equally attacked by hoodlums on 4th December 2021 at Nrobu and on 5th December 2021 at Adani all in Uzo Uwani LGA. Gunshots were fired and injuries and damages to property sustained.
“At the 5th December 2021 meeting of Oganiru in Nsukka town, members were attacked and Oganiru Local Government Coordinator, Mr. Ernest Ogwo, and others  severely beaten while the Council Chairman, Barr. Cosmas  Ugwueze, urged and shouted that they should kill the Coordinator and our members.
“It is noteworthy that although the reports of all these incidents were made at the local police jurisdictions, no action was taken. Even when it was later transferred to Zone 13 at Ukpo, Anambra State, no single arrest has been made till date.
"This complacency by the  the police emboldened members of Enugu State Government's Forest Guards and Neighborhood Watch, who are ironically paid from the public treasury to protect lives and property, to descend on and brutalise Oganiru Enugu members during the just concluded PDP three-man delegates election.
"Now they have intensified their threats to Oganiru members across the state ahead of the PDP primary elections, just for exercising their democratic freedoms of association, assembly, expression, and political choices.
"Yet they claim that Enugu is peaceful and in the hands of God", Dr. Onah recounted.
He called on the Inspector-General of Police and the security agencies to rise to the occasion to impartially protect law-abiding citizens, vowing that Enugu people would never succumb to intimidation in their quest for quality and credible leadership in the 2023 general election.
News