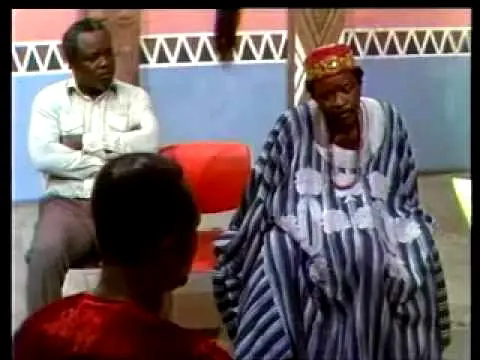 The defunct popular TV show, “The Village Headmaster” will return on the NTA network on Sunday and will show by 7 pm.

The Director-General of NTA, Yakubu Mohammed announced this on Friday at the official launch of the TV series programme.

The Village Headmaster is a Nigerian television drama series created by Olusegun Olusola and produced by Dejumo Lewis. Originally a radio drama series, the programme was Nigeria’s longest-running television soap opera shown on the NTA from 1968 to 1988 and starred Ted Muroko as the original headmaster.

The programme is jointly sponsored by NTA and Wale Adenuga Productions.

In order to maintain its originality, quality, feel and philosophy, the renewed cast is super-packed with the choicest names in the industry.

It features some of the founding members of the series notably Kabiyesi, Dejumo Lewis, Ibidun Allison (Amebo), Dan Imodu (Dagbolu), Dele Osawe (Teacher Fadile), to mention but a few.

Other prominent members of the new cast include gice, Chris Iheuwa, Mr Latin, Funky Mallam, Jide Kosoko, Omo Ibadan, Okele and Fathia Balogun. Others are Rycardo Agbor, and Yemi Shodimu. There are also Binta Ayo Mogaji, Jide Alabi, and many others.

In his remarks,  the Minister of Information and Culture, Alh. Lai Mohammed said ‘‘The Village Headmaster was at one time undoubtedly Nigeria’s first-longest-running television drama series which was produced by the Nigerian Television Authority NTA and ran consecutively every week for decades.

‘‘The series was set in Oja, a fictitious Yoruba village, while the series was woven around the lives of the villagers from royalty to education and so on. The programme captivated viewers and it was difficult to look away from the TV set while the drama series was showing.

“The Village Headmaster”, was an addiction for many television viewers across Nigeria. Lovers of the sitcom rushed home by 8 PM every Sunday to watch it. Each of the stories of the series was gripping and every episode was memorable.

‘‘The programme was the first major show since the country gained independence and was also the longest soap opera in production for many years until 1984.

Several efforts were made to revive the programme. The one that readily comes to mind was in 2001 when NTA made a concerted effort to reintroduce The Village Headmaster. The viewing public was seriously excited.  That excitement was however dashed. Little did we know that those hiccups were the ingredients that would eventually give a lasting hope for the series.

Recall that on Friday September 4th, 2020, the NTA led by the Minister and CEO of Wales Adenuga Productions, Chief Wale Adenuga, signed an MoU that officially marked the beginning of a partnership to bring “The Village” back on television.

According to the Minister, many episodes of the programme are in the can and ready for the pleasure of the viewing public.

The Minister, however, noted that some of the members of the original cast have passed on and therefore are no longer alive to witness the rebirth of the iconic series and called for a minute of silence for them.

Prominent among them is Ambassador Segun Olusola, former Nigeria’s Ambassador to Ethiopia. He created the series as a staff of the then Western Nigeria Television – WNTV, now NTA Ibadan.

Telecommunications Service Provider and sponsor of the TV series, Globacom had on Wednesday announced the return of the classic TV series after it was created over four decades ago.

According to  Gloacom, the drama series was rested in 1988 but has undergone ‘a reboot.

For Globacom, “The Village Headmaster remains unmatched and unparalleled in the annals of Nigeria Television”.

“As an innovative technology company committed to excellence, Globacom is delighted to be bringing back this iconic television program, which has undergone a spectacular makeover by Wale Adenuga’s WAP TV to delight Nigerians”.

The Director-General of Voice of Nigeria, Mr Osita Okechukwu said with the return of the TV Drama Series, Viewers would watch it with a great sense of nostalgia for the rich cultural, educative and informative content.

The Director-General of the National Council for Arts and Culture, NCAC, Otunba Segun Runsewe said the return of the TV Show is good for Nigeria especially now the country is divided and has lost the original values it was known for.

While calling the promoters to focus on quality content, he urged Nigerians to take the opportunity it offers to rebuild and reunite the country to its past glory.

The Village Headmaster will start showing this Sunday on NTA, AIT and WAP TV.