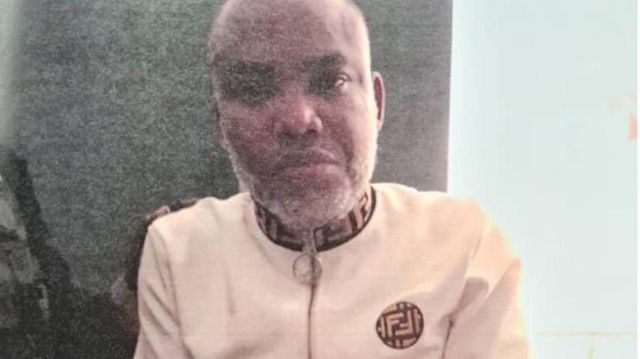 Justice Binta Nyako of the Federal High Court Abuja, on Friday, struck out eight of the 15 terrorism and felony charges preferred by the Federal Government against the detained leader of the Indigenous People of Biafra, Nnamdi Kanu.

Justice Nyako freed Nnamdi Kanu on the eight counts while ruling on a preliminary objection filed by the IPOB leader.

“In this instant preliminary objection application, I have read the counts and come to the conclusion that counts six, seven, eight, nine, ten, eleven, twelve and fourteen have not disclosed any offence against the defendant.

“‘Counts one, two, three, four, five, eight and fifteen show some allegations, which the defendant has to answer.

“The court shall proceed to try the defendant on those counts,” Justice Nyako said.

She, therefore, ordered that counts six, seven, nine, ten, eleven, twelve, thirteen and fourteen should be struck out.

Nyako also ruled that the order proscribing IPOB as a terror group still subsisted until it was vacated since the issue was still on appeal.

She dismissed the argument of Chief Mike Ozekhome, SAN, counsel for Kanu, that whether IPOB was a terrorist organisation under the Nigerian law or not was still a subject of the appeal.

On Kanu’s bail plea, the judge directed counsel to the parties to present their arguments.

Ozekhome, therefore, argued that his client had never flouted any of the bail conditions, but that Kanu only escaped for his dear life during an attack at his residence.

Citing judicial authorities, he said that “until a person is tried and convicted, he should be allowed to walk free.”

He said his client was still innocent until proven otherwise.

“I humbly urge my lord to use your discretion to grant him bail subject to my lord’s condition,” he said.

But lawyer to the AGF, Shuaibu Labaran, disagreed with Ozekhome, contending that Kanu had violated all the bail terms.

He said because the IPOB leader jumped bail, that was why the court revoked his bail and ordered his arrest anywhere he was sighted.

Labaran further argued that what should be the subject matter before the court was the issue of a contempt charge against Kanu and not a bail application.

“My lord granted him bail in 2017 on health grounds, but since then to date, no medical record was submitted to the court until he jumped bail.

“What we should be saying is contempt of court because he has flagrantly violated the orders of the court,” he said.

He urged the judge to be guided by her discretion vis-a-vis the circumstances of the case.

The lawyer said in the alternative, that Nyako should make an order for an accelerated hearing on the matter so that Kanu could “know his fate one way or the order”.

The judge adjourned the matter until May 18 and May 26 for ruling on Kanu’s bail application and for trial continuation.

Speaking with newsmen shortly after the proceeding, Shuaibu Labaran said the court aligned with the Federal Government on arguments about rendition.

According to him, the court said that rendition is lawful.

“On the issue of rendition, the court bluntly said that rendition, in this situation, is allowed because rendition in a criminal case is allowed.

“After all, the defendant is under a bench warrant and anywhere he is seen, the law allows it to be forcefully brought to court,” he said.

On his part, Ozekhome told journalists that the remaining seven counts affirmed by the court would be challenged at the Court of Appeal.

On January 19, Kanu challenged the terrorism charge filed by the federal government against him, arguing that the amended 15-count charge preferred against him was unmeritorious and should be thrown out by the court.

The IPOB leader, through his lawyer, Ozekhome, on Thursday, filed N50 billion damages against the federal government and the AGF over his alleged abduction in Kenya and continued detention.

Kanu had requested N100 million as compensation for the cost of the action at the Federal High Court in Abuja in a suit marked: FHC/ABJ/CS/462/22 dated March 7.

The applicant argued that his “abduction and rendition to Nigeria without extradition proceedings or hearing in Kenya is a clear violation of Article 12(4) of the African Charter on Human and Peoples Rights (Ratification and Enforcement) Act CAP A9, LFN 2004.”

He said it also “violates Article/part 5 (a) of the African Charter’s Principles and Guidelines on Human and Peoples’ Rights.”