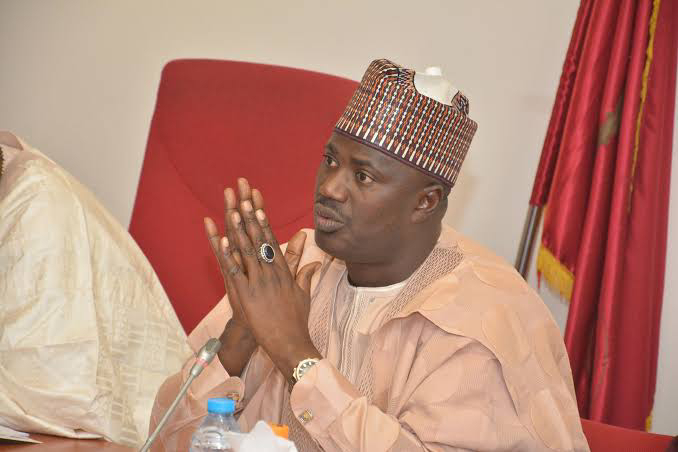 Constituents across the eight local government Councils in Niger North Senatorial District have endorsed the  aspiration of Senator Aliyu Sabi Abdullahi for a third term in office as Senator representing the zone.
They demonstrated their endorsement by procuring N20million nomination form from the All Progressives Congress (APC) and handed it over to him at the Senate  wing of the National Assembly on Thursday in Abuja.
The Leader of the constituents who doubles as Director General of Senator Aliyu Sabi Abdullahi Campaign Organization, Mallam Muhammad Danladi said matters relating to Niger North Senatorial District has positively changed within the last seven years of Senator Sabi's representation.
According to him, Senator Sabi's responsive and quality representation in the Senate within the last seven years, have transformed Niger North Senatorial District and tremendously improved the welfare of the constituents.
"All the leaders of the 87 wards and eight local government Councils in the Senatorial District are here to tell you to continue your responsive and quality representation of them in the Senate.
"You did excellently well during the 8th Senate and also repeating the feat in the about to end 9th Senate, the reason why the largest percentage of constituents from the Zone, want you to continue your good work in the 10th National Assembly.
"As a practical demonstration of our support for you to run again for the Niger North Senatorial District, the N20million nomination form has been procured for you from the National Headquarters of our great party, the All Progressives Congress (APC).
"Niger North people are behind you and you must run, failure of which may result into litigation against you", he said.
In their separate submissions, leaders from all the eight local government Councils from the zone, also called on Senator Sabi Abdullahi to run for Niger North Senatorial seat for the third term.
In his response, Senator Abdullahi thanked his constituents for the unprecedented support given him and  declared his acceptance of their request.
He said apart from the Federal University of Education, Kotangora which he facilitated through sponsorship of a bill to that effect, all the eight local government Councils within the Senatorial District, have been touched in one way or the other, in terms of required Infrastructure.
"To me, if politics is not beneficial to the people, it is useless. My representation of Niger North Senatorial District in the Senate, will surely continue to be beneficial to the entire people of the zone", he said.
News