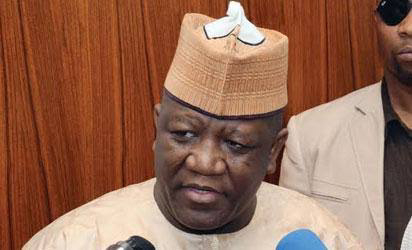 Chairmanship aspirant in the forthcoming national convention of the ruling All Progressives Congress (APC) Abdulaziz Yari has appealed to President Muhammadu Buhari and other leaders of the party to ensure that internal democracy is established in the party in order for it to be strong enough for the challenges of the 2023 general election.

The former governor of Zamfara state made the appeal in a chat with newsmen shortly after a meeting with the APC caucus in the Senate where he appealed to them to support his Chairmanship aspiration.

Yari debunked reports that President Buhari had anointed a serving Senator to be the Chairman of the APC, adding that the party should learn from the mistakes of the past such as the anointing of Adams Oshiomhole as chairman which he said, created the crisis in the party.

Speaking earlier, Deputy President of the Senate, Ovie Omo-Agege who received Yari in company of other Senators of the party said the former governor had the experience to lead the ruling party.

He therefore urged party members to remain united in order to defeat the opposition People's Democratic Party in the general election in 2023.

The ruling All Progressives Congress is scheduled to hold it's national convention in Abuja on Saturday the 26th of March, where a new leadership will be elected.