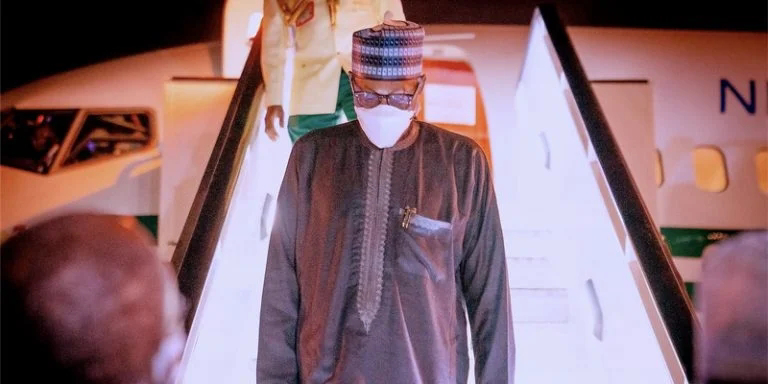 Vice-President Yemi Osinbajo is now in charge of the country.

The president said this shortly before he departed Abuja for a routine medical check-up in London, the United Kingdom.

The president had initially planned to embark on the trip from Nairobi, Kenya after attending the United Nations Environmental Programme (UNEP) at 50 in that country.

His spokesman, Femi Adesina, had on March 1, said from Kenya, the president would proceed to London for ”routine medical checks that will last for a maximum of two weeks.”

However, the president returned to Abuja on Friday around 1.p.m, fueling speculations.

But Malam Garba Shehu, Senior Special Assistant to the President on Media and Publicity, told Daily Trust newspaper that the trip had been moved to Sunday.

According to Adesina’s statement, Buhari is due to return to Abuja in two weeks.

Fielding questions from reporters before his departure at the Nnamdi Azikiwe International Airport, Abuja, President Buhari said Vice President Yemi Osinbajo was in charge constitutionally when he was out of the country.

The President said his absence would not affect state function as he was aware of every development taking place in his absence.

Asked about how the country would function in his absence, he said: “Well, I cannot claim to be doing the work alone. The government is fully represented. The Vice President is there. Constitutionally, when I’m away, he’s in charge. Then, we have the Secretary to the Government of the Federation and then the Chief of Staff, so, there’s no problem.”

On the anxiety over the March 26 convention of the ruling All Progressives Congress (APC), he doused tension and said the party had the capacity to organise the scheduled programme.

On what he would tell Nigerians who had expressed doubts regarding the ability of APC to conduct his national convention successfully, he said: “Well, they should wait and see. How did we come as a party to take power from the ruling party which had been there before us for so many years? So, we have the capacity. Everything will be alright.”