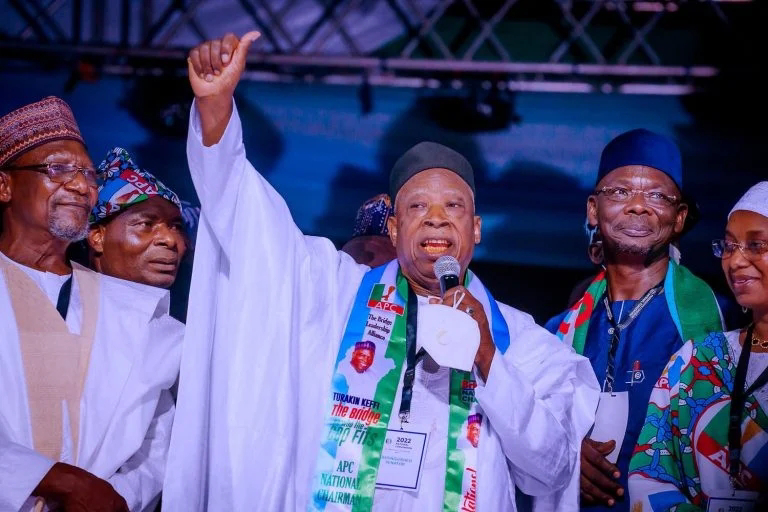 Following days of negotiations and disagreements, the preferred candidate of President Muhammadu Buhari,  for the position of the national chairman of the All Progressives Congress, Senator Abdullahi Adamu, was ratified as the new party chairman late Saturday night.

The ratification of Adamu and other members of the incoming National Working Committee and Zonal Leaders of the party was part of activities at the convention of the party, which commenced on Saturday and ended in the early hours of Sunday at the Eagles Square, Abuja.

Adamu, a former governor of Nasarawa State, who had emerged as a consensus candidate, was not among those who initially expressed interest in the chairmanship position. However, he was later drafted into the race by the Presidency and some governors.

The persuasion and insistence by the President for Adamu’s emergence forced other aspirants for the national chairmanship position to grudgingly step down on Saturday.

Meanwhile, facts emerged on Saturday night on how leaders of the party across the country arrived at the consensus candidates for the various party positions.

The Punch newspaper reports that candidates, who made the Unity List compiled by the party leaders and various stakeholders, were ratified at the convention.

The list emerged shortly before the President arrived at the convention. The most prominent on the list was Adamu.

The consensus candidates, who were assured of the support of the party leadership, would form the National Working Committee of the APC for the next four years.

One of the main tasks awaiting the new NWC is to plan and oversee the party’s primaries ahead of the 2023 general elections.

The Vice-President, Prof Yemi Osinbajo, arrived at the event at 7:59 pm; the President of the Senate, Ahmed Lawan at exactly 7.06 pm, while the Speaker of the House of Representatives, Femi Gbajabiamila, arrived at 7.03 pm.

Confronted by the delegates’ restiveness over the delay, Gbajabiamila said it was better to start late and get things right.

However, the event did not commence until around 8:23 pm when the President arrived at the convention ground. His late arrival was said to have been a result of prolonged discussions with relevant stakeholders on the sharing formula for the different offices.

Sources close to the party leadership said that party leaders who successfully persuaded national chairmanship aspirants to step down for the President’s choice leveraged the opportunity to insist on their candidates being chosen for other positions.

Apart from Adamu, a former deputy governor of Osun State, Iyiola Omisore, was named as the party’s national secretary.

Two members of the Caretaker/Extra-Ordinary Convention Planning Committee, Ken Nnamani, a former Senate President, and Ismail Ahmed, a former National Youth Leader, both of whom were to contest positions at the convention lost out.

Nnamani lost to Enaukwu as the Deputy National Chairman (South) while Ahmed lost the National Organising Secretary position to Argungu from Kebbi State.

Enaukwu, a former national officer with the defunct All Nigeria Peoples Party and the Congress for Progressives Change, was the National Vice Chairman (South-East) of the APC under Chief John Odigie-Oyegun and Adams Oshiomhole leadership.

It was learnt that some members of the three political parties that merged to form the APC complained about the “too many members of the new-Peoples Democratic Party bloc” in the incoming NWC.

The three legacy political parties that formed the APC were the Action Congress of Nigeria, ANPP and CPC. However, factions of the All Progressives Grand Alliance and a breakaway group in the PDP, known as the nPDP, were among the founding fathers of the APC.

Meanwhile a serving minister who spoke to the Punch anonymously was quoted thus; “We are gradually becoming a branch of the PDP with the way we are going. The incoming national chairman and the national secretary were members of the PDP. There are others as well with solid PDP background.

“How then do we abuse the PDP during campaigns? Will people not ask us to differentiate between the PDP then and now? That is why we have to drop some of those proposed for top positions in the incoming NWC. Already, some are already taunting us, referring to us as another arm of the PDP.”