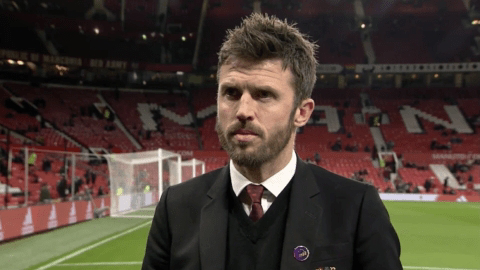 Michael Carrick says he is leaving Manchester United after the end of his spell as caretaker manager.

Carrick, in charge for three matches, announced his decision after United's 3-2 win over Arsenal on Thursday.

"After a lot of thought and deliberation, I have decided that now is the right time for me to leave," said Carrick.

Ralf Rangnick has been appointed Interim manager until the end of the season.

Carrick, a five-time Premier League winner during 12 years as a player at United, took over as caretaker boss after Ole Gunner Solskjaer was sacked on 21 November.

He took charge of the 2-0 Champions League away win to Villarreal on 23 November before dropping Cristiano Ronaldo to the substitutes bench for the 1-1 draw at Chelsea last Sunday.

Carrick announced his decision to leave minutes after the Arsenal victory which lifted United into seventh spot in the table.

"It wasn't easy telling the players," he added. "In some ways you feel like you're leaving them in the lurch but sometimes you have to do what's right.

"I've loved working with them - they are a terrific group of players."