Another Nonentity Has Been Appointed As Super Eagles Coach - Emeka Ezeugo 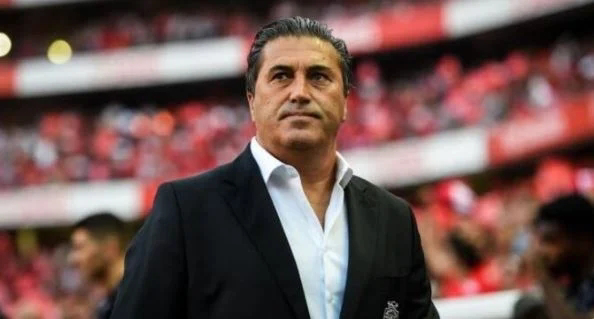 Former Nigerian International and hard tackling defender, Emeka Ezeugo has called on football loving Nigerians to boycott all matches involving the Super Eagles following the appointment of Portuguese, Jose Peseiro as new coach of the Eagles.
The latest appointment which was confirmed by the Nigeria Football Federation comes days after the sack of Franco-German, Gernot Rohr.
In a post on Facebook, Ezeugo insisted that "nonentities" should no longer be allowed to coach the Super Eagles.
He went ahead to allege that: "Amaju Picnic (NFF President) has just appointed another Rohrbish Rohr (in clear reference to former coach Gernot Rohr) that they will be sharing 75 percent of his monthly salaries".
The former Abia Warriors coach who had his contract terminated even before it kicked off urged Super Eagles fans to resist the current appointment and demand accountability from football administrators in the country.
"Super Eagles' fans and lovers of the beautiful game must unite to boycott every National Team matches at home and away matches until grossly corrupt football administrators and their media puppets learn that power belongs to the people."
"Super Eagles' fans, patriotic Nigerians this is the moment to proudly display your patriotism, unity in diversity and Rock solid Solidarity. I call upon all Lovers of the Beautiful Game to demonstrate to Nigeria Football Federation HONCHOS that the fans of Global Game are more core stakeholders of the game than the grossly corrupt football administrators who came to reap where they planted nothing. NFF Looters will recognize how powerful fan of football are when Super Eagles plays in an empty stadium twice. Don't let this moment fade away. Take advantage of it and ensure that NFF Rogue football Administrators hires a quality coach for our national team.
"Anticipating a nationwide and colossal response that will give Amaju Pinic and Shehu a heart attack or a severe stroke." he concluded.
Sport