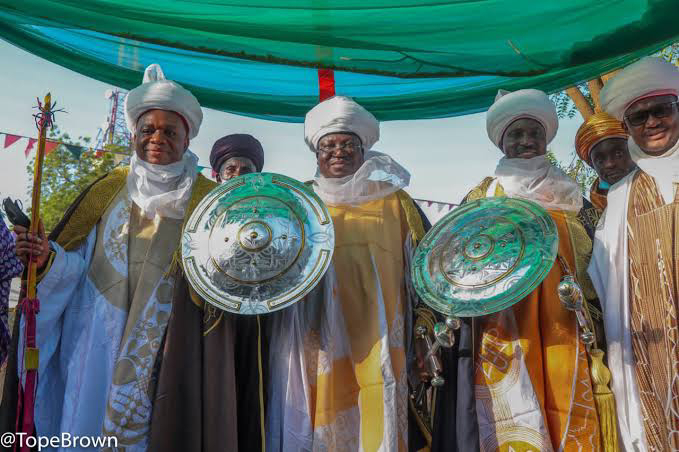 The Emir of Argungu, HRH, Alhaji Samaila Muhammadu Mera on Friday in Kebbi State formally turbaned the Senate President, Ahmad Lawan as the Ganuwan Kabi(Defender of Kebbi Kingdom).
The newly turbaned Ganuwan Kabi, dressed in colourful regalia, wielding protecting shield and armed with sword, dipicting a Warrior, a Defender and a Protector.
A statement signed by Ola Awoniyi, the Special adviser to the Senate President on media said the colourful but brief Investiture ceremony was part of the 25th anniversary of the coronation of the Emir.
Also turbaned were the former Governor of Abia State and current Chief Whip of the Senate, Senator Orji Uzor Kalu (as Kibiyan Kabi) and the Managing Director of Kaduna Electricity Distribution Company, Engr Garba Haruna Argungu.
The event held at the Emir's palace and witnessed by the Governors of Kebbi, Alhaji Abubakar Atiku Bagudu, Yobe, Alhaji Mai Mala Buni, Katsina, Alhaji Aminu Bello Masari and dozens of Federal lawmakers.
Among the Royal Highnesses at be the occasion were the Sultan of Sokoto, Shehu of Borno, Emir of Kano, Emir of Zazzau, Emir of Bade, Emir of Biu, Emir of Machina, Emir of Lafia, Emir of Zamfara, Emir of Zuru.
News