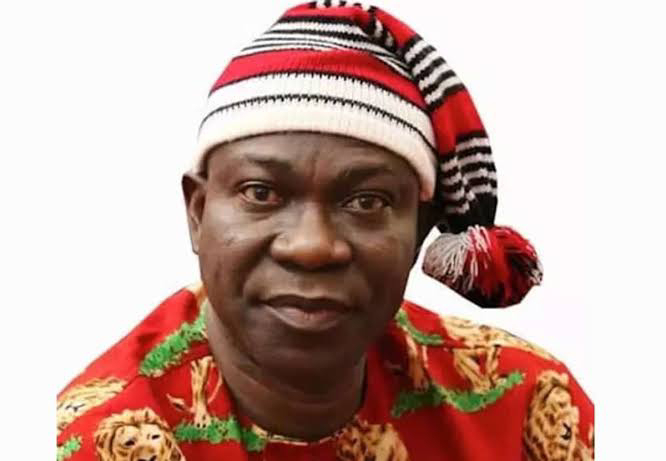 Former Deputy President of the Senate, Senator Ike Ekwermadu, has enjoined the Igbo in diaspora to offer strong voice against violent agitations and also bring their influences to bear in the search for security and stability in Igbo land.
This was even as he gave assurances that the South East Caucus of the National Assembly, which he is the leader, was also working towards defusing tension in the region as well as finding a political solution that would result in the release of the leader of the Indigenous Peoples of Biafra, IPOB, Mazi Nnamdi Kanu.
Ekweremadu blamed the agitations by various parts of the country on a flawed federal system, injustice, poor management of the nation’s diversity, failure of the federal government to secure lives and property, and needless clampdown on self-determination agitators when dialogue and giving every part of the country a sense of belonging could have sufficed.
He, however, insisted that violent agitation was not the answer.
The lawmaker bared his mind in a lecture entitled “The Igbo in Diaspora: A Perspective” that he delivered virtually at the Igbo Heritage Lectures and Ugwumba Excellence Award event, which held in Pretoria, South Africa, Sunday evening.
He observed that one of the worst things that could happen to Ndigbo at this time was to allow their homeland to be turned into a theatre of war.
“The injustices and marginalisations are palpable and must be addressed. But by all means, we must ensure the stability of Igbo land because only by so doing can Alaigbo (Igbo land) prosper economically and also elicit local and international support and sympathy over their plights.
“What has happened in Alaigbo in the past few months is odd, ‘un-Igbo’, and sacrilegious. Destruction, waste of human lives, and economic losses have been the lot of our region. In particular, the sit-at-home has hemorrhaged Igbo lives and economy and it is good the IPOB has said they are no longer interested in the sit-at-home. No wise man brings war into his home. Our people prosper on industry, commerce, and the informal sector. Most of them survive on daily income.
“Therefore, while we are at liberty to employ every legitimate and democratic means to press for justice and equity, we must all work together to condemn  and end the violence, irrespective of whatever quarters it is coming from.
“This is a special appeal to Ndigbo in South Africa, in particular, to wade into the orgy of violence in Igboland and help to restore normalcy. Ndigbo at home expect the Igbo in diaspora to lead the campaign against violent agitations and insecurity in our region because threats to Igbo businesses, the peace, security, and stability of the South-East are threats to our very existence as Ndigbo", he stated.
Continuing, he said: “As the intellectual bank of Ndigbo with extensive exposure to liberal and progressive democratic ideals, and access to international resources, the Igbo in diaspora are well positioned to elevate the intellectual content of the Igbo struggle for justice and equity.
“How best can we address the issues of exclusion, imbalances, detention of many Igbo sons and daughters in various correctional centres across the country, the issues of clampdown on unarmed protesters, and the challenge of extra-judicial killings in Igbo land without recourse to violent agitations?”, he added.
On Mazi Nnamdi Kanu, Ekweremadu said: “Let me also assure you that the South East Caucus of the National Assembly is not resting on its oars. We are working quietly and surely to address these issues, including finding a political solution to the Mazi Nnamdi Kanu matter.
“We did it before in the case of Chief Raph Uwazuruike in 2007. We also did it in the case of Mazi Nnamdi Kanu in 2017. And God willing, and with your support and prayers, we will succeed again in the matter of Nnamdi kanu to promote peace and stability in our region”.
Ekweremadu, however, enjoined the Igbo in diaspora to show interest in leadership recruitment in Igbo land.
“The Igbo diaspora must show more than a passing interest in leadership recruitment at all levels in Alaigbo. If possible, please, come home and run for elective offices. Those who cannot come home should prompt and support other candidates of their choice. The bottom line is to ensure that our local, state, and federal political offices are occupied by our best and those who have Igbo at heart. That to me, is the beginning of the real liberation struggle for Ndigbo because charity begins at home”, he concluded.
News