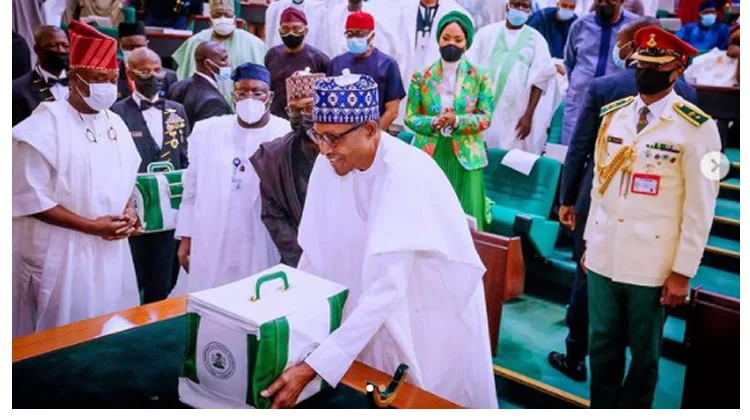 President Muhammadu Buhari on Thursday presented the 2022 budget proposal of N16.39 trillion to a joint session of the National Assembly.

According to Buhari, the estimate, captioned 'Economic Recovery and Sustainability' is predicated on a crude oil benchmark price of $57 per barrel, exchange rate of N410.15 to the dollar, daily oil production of 1.88 million barrels per day and projected revenue of N17.7 trillion for the 2022 fiscal year.

While giving a breakdown, the President said N768.28 billion is for statutory transfers, N6.83 trillion for non-debt recurrent expenditure and  N5.35 trillion for capital expenditure, while the 2022 Budget deficit, is projected at N5.20 trillion.

He added that debt service is estimated at N3.61 trillion; while provision for the Sinking Fund for maturing debts is placed at N292.71 billion.

He further stated that the deficit will be financed mainly by new borrowings of N5.012 trillion.

President of the Senate, Ahmad Lawan, in his opening remarks commended President Buhari for the budget trajectory, saying with the 2022 budget, it is important to prioritise the completion of ongoing projects.

He said generating more revenues through agencies will reduce government’s deficit and dependence on external borrowing to fund the country’s national budget.