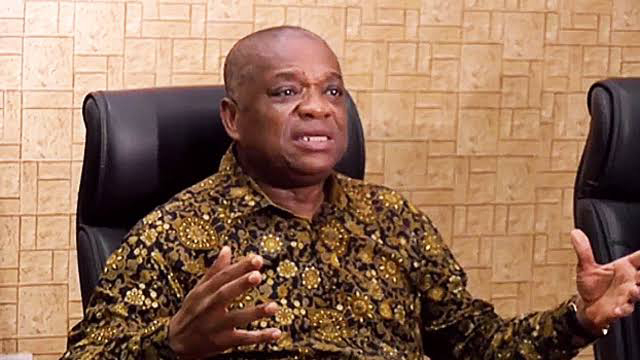 Former Governor of Abia State and Chief Whip of the Senate, Dr. Orji Kalu has described the invasion of the Abuja residence of Justice Mary Odili of the Supreme Court of Nigeria as a cruel, undemocratic and uncivilized act.
Condemning the Gestapo raid on the house of the Judge, Kalu called on the federal government to commence a full scale investigation into the ugly incident, adding that the unwarranted invasion of the house of the Judge is capable of causing tension in the country.
Kalu, who is also the Chief Whip of the Senate, stressed that in a democratic set-up, the rule of law must be strictly adhered to for the sake of national progress and development.
The former Governor while condemning the sad incident, urged appropriate government agencies to discharge their duties and responsibilities in tandem with the constitution, noting that violation of human rights will set the country backward.
Kalu, who made these assertions in a statement he personally signed on Saturday, while reacting to the raid on the residence of Odili, called on the federal government to bring the perpetrators of the evil act to book, adding that unlawful invasion of a citizen's residence is against the constitution of Nigeria and tenets of democracy.
He said, " the country's democracy is gradually growing and as such, acts that are not in tandem with the constitution of Nigeria and democratic process must not be tolerated.
"The federal government should commence robust  investigation into the sad development to save the face of the country in the comity of nations and to bring the perpetrators of the unfortunate incident to book.
"The rule of law must not be undermined in a democratic regime.
"The law must be respected by the government and the governed".
Kalu called on the federal government and the citizenry to embrace the tenets of democracy in all pursuits, adding that no country can progress in an atmosphere of lawlessness.
News