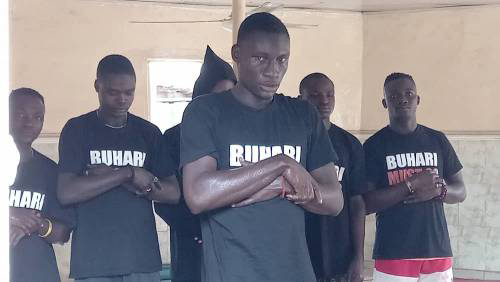 The activists, who had earlier observed their prayers inside a mosque near Aguma palace, later joined other muslim faithful at the overflow of the Central Mosque to observe the Juma'at prayer.

The youths decried the inadequate water supply and electricity in the area as well as the corruption, insecurity and bad governance ravaging the country.

The activists, who dared security operatives in the area, insisted that President Muhammadu Buhari must resign from office for his incompetence and hardship he had brought upon Nigerians. 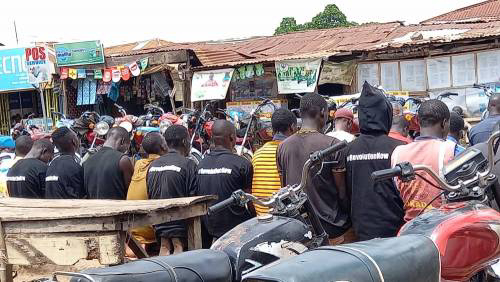 The youths were seeing exchanging greetings with their friends shortly after the prayer.

It would be recalled that five activists and worshippers were arrested and brutalised at the Dunamis International Gospel Centre (Glory Dome) by the church security on July 4.

They were thereafter handed over to the operatives of Department of State Services for wearing #BuhariMustGo T.Shirts.

The overzealous security operatives seized their mobile phones and forced them to delete the Facebook live stream.

They were detained in an underground cell at the DSS headquarters for more than 30 days and also prevented them from seeing their lawyer and families.

The activists insisted that they committed no offence for wearing the T.Shirts.

Global human rights body, Amnesty International, had called for the release of the activists saying that they were exercising their rights as enshrined in the 1999 constitution.

Also, despite the rulings of the Federal High Court and the Magistrate Court ordering the release of the activists from detention, the DSS had continued to hold them after they had met their bail conditions.

The secret police later on Tuesday bowed to the pressure from Nigerians and released the young Nigerians.