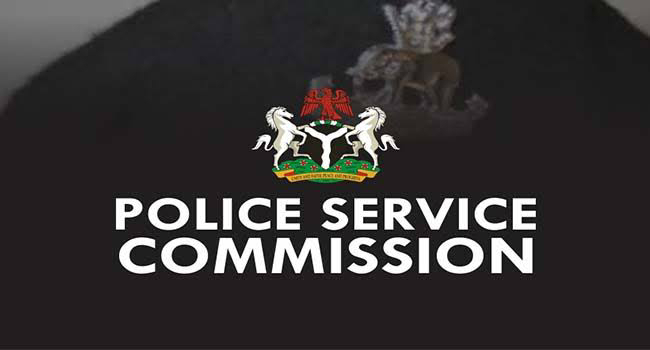 A Port Harcourt based legal practitioner, Francis Echianu has urged the Police Service Commission (PSC) to immediately begin the investigation and prosecution of two police officers, ASP Jamiu Olaigbe and Inspector Ati Jonah including his cousin Chidi Echianu for illegal detention and forgery of court documents.

In a petition addressed to the PSC in Abuja, Barrister Echianu stated that the two police officers with the instruction of his cousin, Chidi who is based in Germany, arrested him (Barrister Francis Echianu), his younger brother (Chijioke Echianu) 36 and his seventy eight year old father (Meshack Echianu) in a manner reminiscent of the unlawful arrest and detention of Vincent Kelly Chibuzor by the embattled former team leader of the IGP Intelligence Response Team, ACP Abba Kyari through the directives of fraudster, Abbas Ramon Azeez popularly known as Hushpuppi.

Barrister Echianu lamented that the illegal detention which began on the 24th of December 2020 lasted for fourteen days and was sequel to trumped up allegations of threat to life which his cousin Chidi made through a petition where he accused Meshack Echianu, being his uncle and his two sons of trying to kill him as a result of a land dispute, an allegation which the legal practitioner said is baseless and orchestrated to force Meshack and his children to relinquish possession of a block of flat in their home town, Osina, Ideato North Local Government Area of Imo state, where the said Meshack and his children had resided for the past four decades.

The legal practitioner therefore urged the Police Service Commission to expeditiously investigate and prosecute the two police officers involved in the matter for tarnishing the image of the Nigerian Police as Chidi, the paymaster of the two policemen is a known drug addict who had served time in jail in 2008 for drug trafficking in Germany.

The petition as deposed by Barrister Francis Echianu partly read;  "...on the 24" day of December 2020 in my village Umuogbu Durunogbu Osina In Ideato North Local Government, Imo State, my cousin Mr. Chidi Ahamefuna Echianu brought in from Abuja, one ASP Jamiu Olaigbe and Inspector Ati Jonah to arrest me, my father (Chief Meshack) and my junior brother Chijioke Echianu on a frivolous allegation that we threatened his life.

"That on 24 December 2020 the said ASP Jamiu Olaigbe and Inspector Ati Jonah carried out the unlawful instruction of Chidi Ahamefuna Echianu and moved me, my father and my junior brother to Abuja were they detained us at the Asokoro Police Station Abuja instead of Police Force Headquarters Edet House, Abuja.

"That on the 29th day of December 2020 the said ASP Jamlu Olaigbe and Inspector Ati Jonah under the Instruction of Chidi Echianu went behind and obtained a FORGED detention warrant purportedly from Upper Area Court Karu Nassarawa State and same was served on me, by Inspector Jonah on the 31" day of December 2020. The copy of the forged detention warrant Is hereby attached to this application for ease of reference. 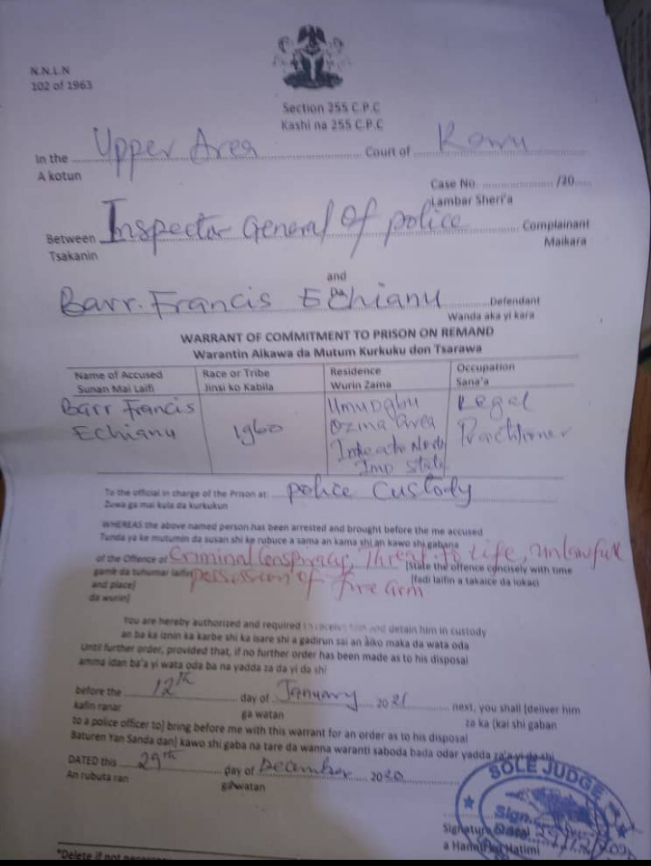 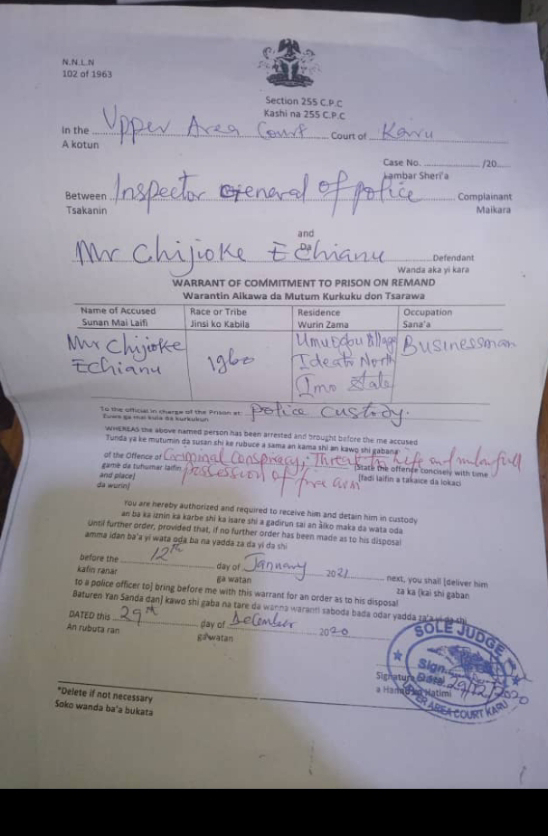 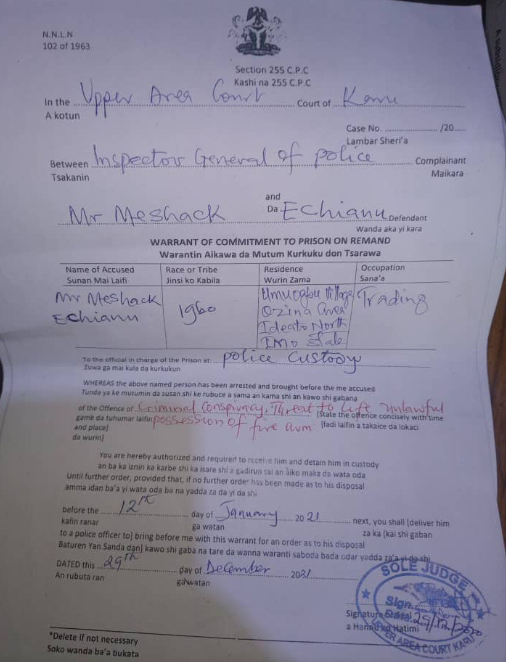 "That while in detention I briefed one Barr. Alozie Nmerengwa through my junior brother Chinedu Echianu, a journalist who resides in Abuja to secure our release from Asokoro Police Station, who diligently approached Upper Area Court New Karu Nassarawa State to inquire the source of the purported detention warrant and he was duly informed by the registrar of the said Court that the said detention warrant is fake because of the understated fundamental defects viz:

"a. No Suit Number was inserted on the detention warrant and such was not in their record of cases.

"Attached is the notice of elevation from NIC for ease of reference. 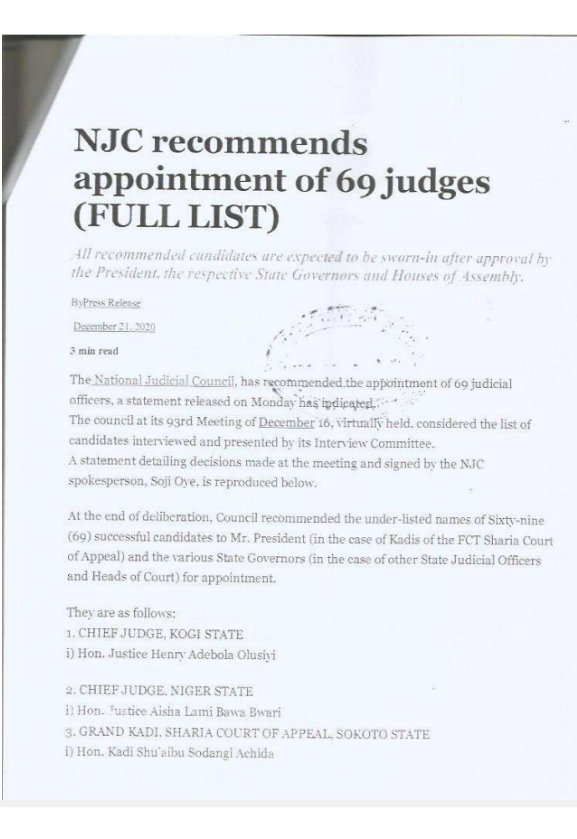 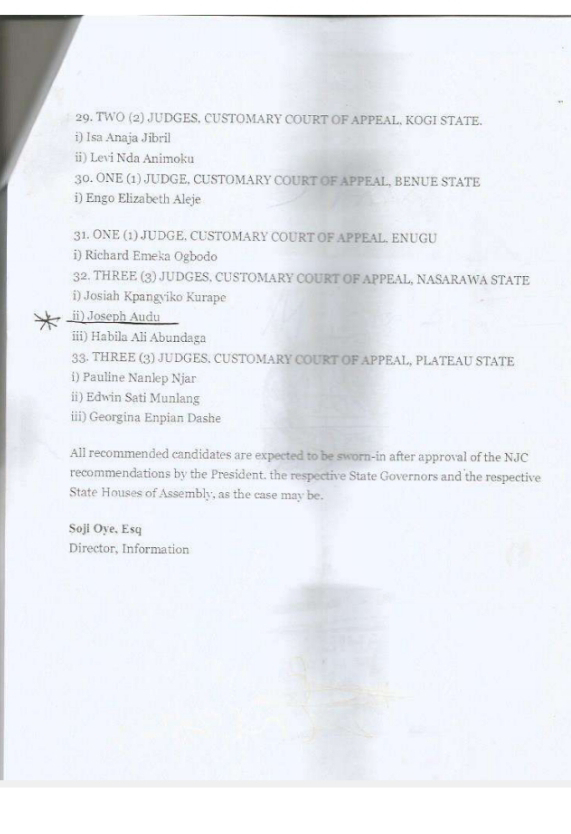 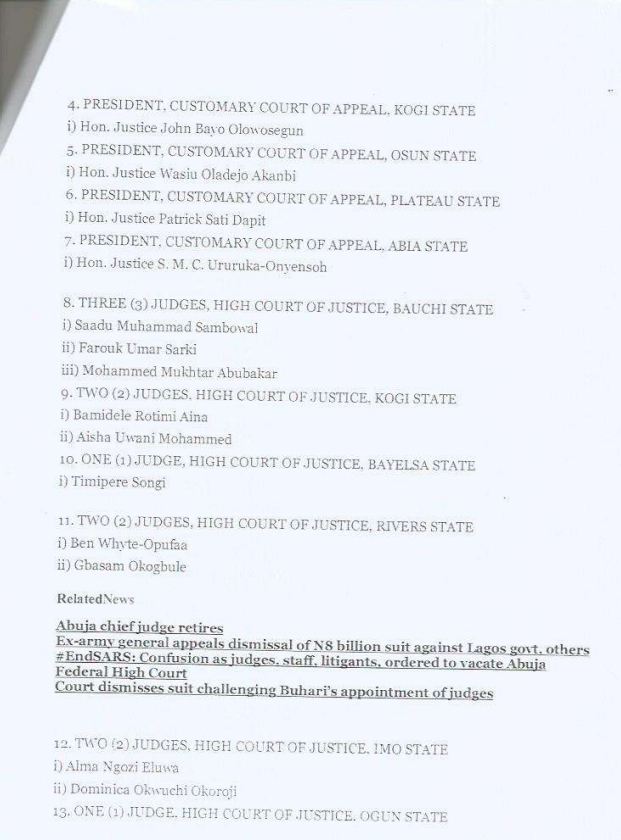 c. That the signature on the said detention warrant was forged.

d. That he is not aware of the said detention warrant,

"Our counsel Barr. Alozie Nmerengwa deposed an affidavit of facts at the Abuja High Court to corroborate the aforementioned information as same are information within his personal knowledge and same is attached to this application for ease of reference. 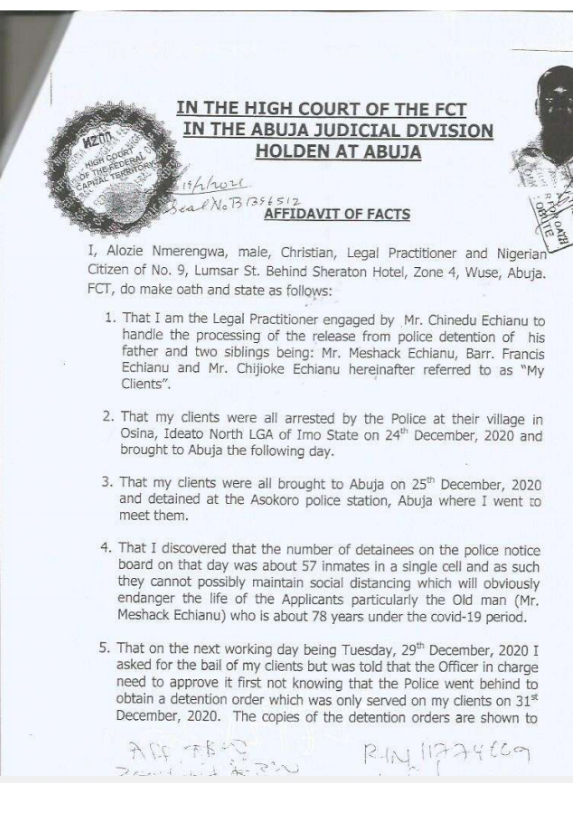 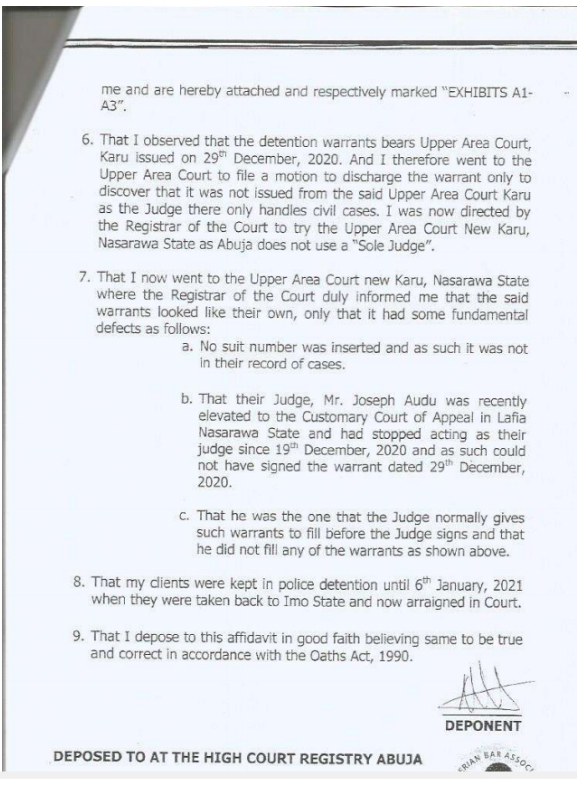 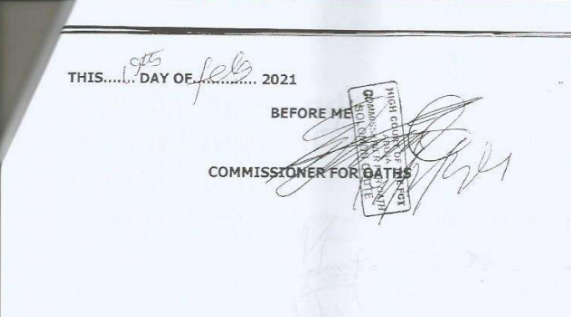 "That my Father Chief Meshack Echianu, my Junior brother Chijioke Echianu and my humble self were detained at Asokoro Police Station for 14 days without being arraigned before a court of competent Jurisdiction because of the illegal conspiracy between Mr. Chidi Echianu, Asp Jamiu Olaide and Inspector Ati Jonah just to ensure that my Father, a 78 years old man and my humble self endorse a document relinquishing our proprietary right of my father’s apartment and also to vacate the portion of the family house in our village which my father built with his hard earned money.

"That the reason behind this unlawful arrest and detention is hinged on a land dispute between our family and that of my cousin Mr. Chidi Echianu, rather than going to the civil court, he resorted to use Asp Jamiu Olaigbe and Inspector Ati Jonah to intimidate me and my family to the extent of forging a court process which is a public document just to ensure that I, my father and junior brother are perpetually detained until we agree to vacate the portion of family house built by my father which we have been living in for the past 40 years.

"Sequel from the above, we want you to make good use of your office to ensure that the above named persons were arrested and prosecuted in any court of competent jurisdiction." the petition concluded.

Below is the full text of the petition: 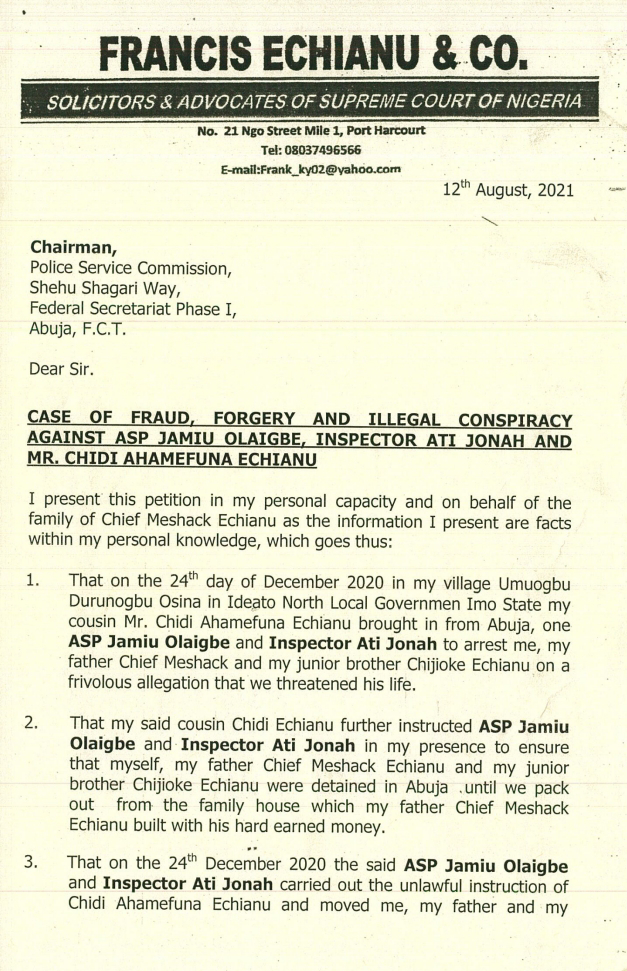 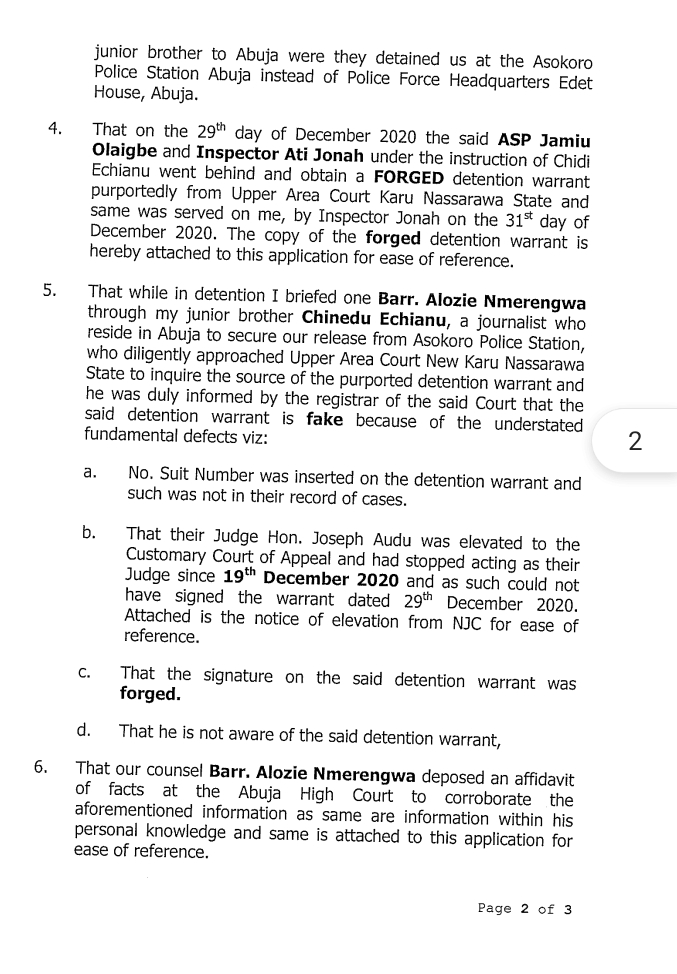 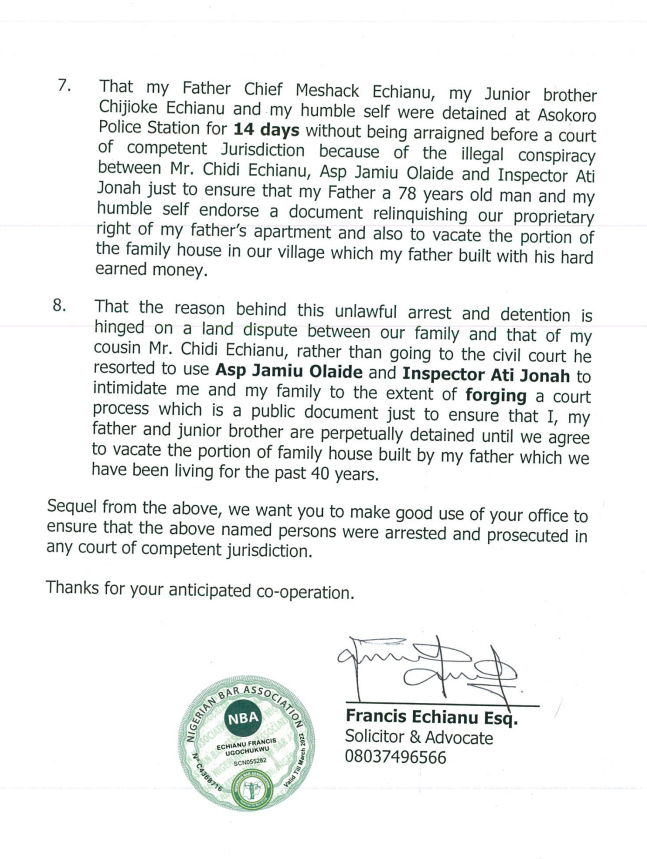