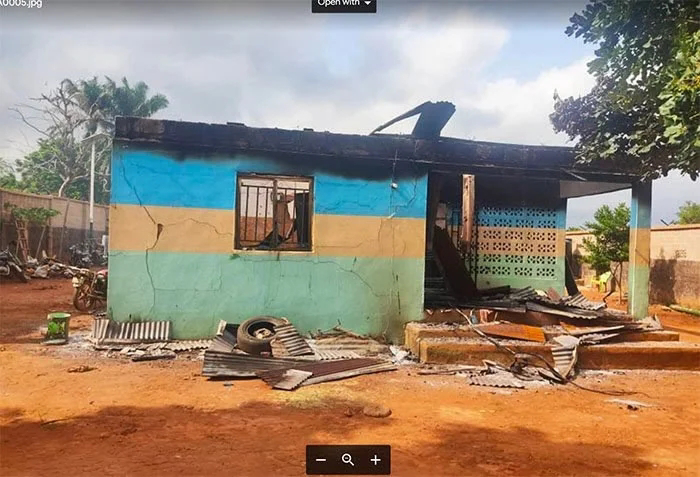 
The attack claimed the lives of four persons which included a police Inspector and three of the attackers.

While parts of the police Division were burnt, cars parked on the premises were not spared.

Punch newspaper reports that the attackers and the policemen on duty engaged in a gun battle for some time.

The police spokesperson for the state police command, Mike Abattam, who confirmed the development, disclosed that the incident took place around 11.35 pm on Thursday.

He informed that some of the surviving bandits escaped with bullet wounds.

Abattam said, “On August 5, about 21:35 hours, armed bandits, in their numbers attacked and threw explosives and petrol bombs on top of the roof of Orsu Police station damaging the roof and causing fire outbreak in the station which spread and affected some of the vehicles parked at the parking lot. The command’s tactical teams on the ground engaged the bandits in a gun duel.

“And due to the superior firepower of the police the bandits were subdued. Three of the bandits were neutralized and their guns, one pump action gun, and two locally-made double barrel pistols were recovered while others escaped into the bush with bullet wounds. Unfortunately, a police inspector lost his life in the attack.

“Meanwhile the command is using this medium to call on the good people of Imo State especially, the Orsu community to assist the police with credible information that will lead to the arrest of the escaped bandits and to report to the nearest police station any person seen with or treating bullet wounds. Also, hospitals are advised to ensure that they report any person who comes to them for treatment of bullet wounds.”