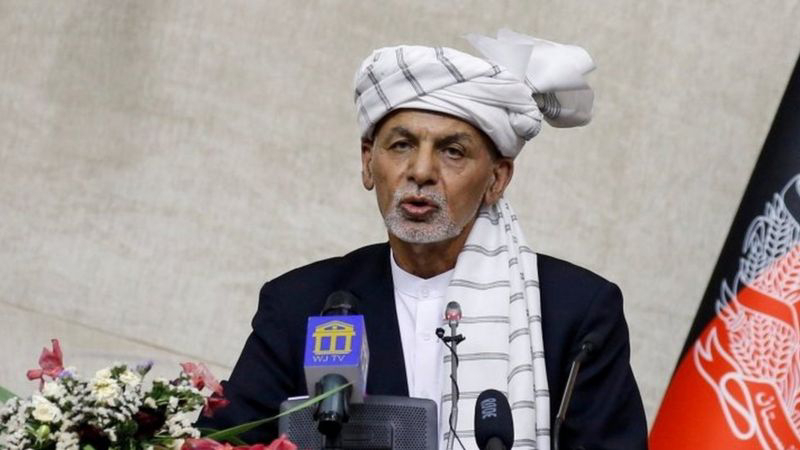 Mr Ghani left Afghanistan as the Taliban advanced on the capital city Kabul over the weekend.

The UAE's foreign ministry said the country had welcomed Mr Ghani and his family on humanitarian grounds.

In a video address later on Wednesday, Mr Ghani denied fleeing and said he had left to prevent what he described as a "huge disaster".

"For now, I am in the Emirates so that bloodshed and chaos is stopped," he said. "I am currently in talks to return to Afghanistan."

Mr Ghani also said rumours that he had travelled to the UAE with a large amount of money were "completely baseless" and "lies".

The 72-year-old has faced intense criticism from other Afghan politicians for leaving the country.

"God will hold him accountable and the nation will also judge," said Abdullah Abdullah, chairman of Afghanistan's High Council for National Reconciliation.

US President Joe Biden also criticised Afghanistan's government for fleeing in a speech on Monday.

And later on Wednesday, the US Deputy Secretary of State Wendy Sherman told reporters that Mr Ghani was "no longer a figure in Afghanistan".

However, the US has continued to refer to "President Ghani", with the State Department saying that there has not been a formal handover of power.

In his video address, which was streamed live on Facebook, Mr Ghani said he was evacuated by his security team from the presidential palace "in a condition where I couldn't even put on my shoes".

"Events unfolded at a fast pace. I wanted to negotiate an inclusive government with the Taliban," he said, adding that he supported talks between the Taliban and former officials from his administration.

This is not the first time the UAE has provided a safe haven for deposed or fugitive leaders from other countries. Pakistan's Prime Minister Benazir Bhutto made Dubai her new home in the 1990s before later returning to power.