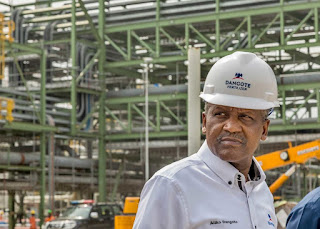 The President of Dangote Group, Aliko Dangote, has been ranked 117th in the latest Bloomberg Billionaires Index.

The index is a daily ranking of the world’s richest people. Details about the calculations are provided in the net worth analysis on each billionaire’s profile page.

In the index, which usually has its figures updated at the close of every trading day in New York, Dangote is said to have a net worth of $17.8bn.

Topping the index is Elon Musk with a net worth of $194bn. He’s closely followed by Jeff Bezos who is also worth $194bn.

In third place is Bernard Arnault at $174bn. Until recently, the position was held by the Microsoft co-founder, Bill Gates, who lost it after some stock transfers to his ex-wife, Melinda French Gates, after their divorce was concluded days ago.

Facebook CEO Mark Zuckerberg holds the fifth position with a net worth of $135bn.