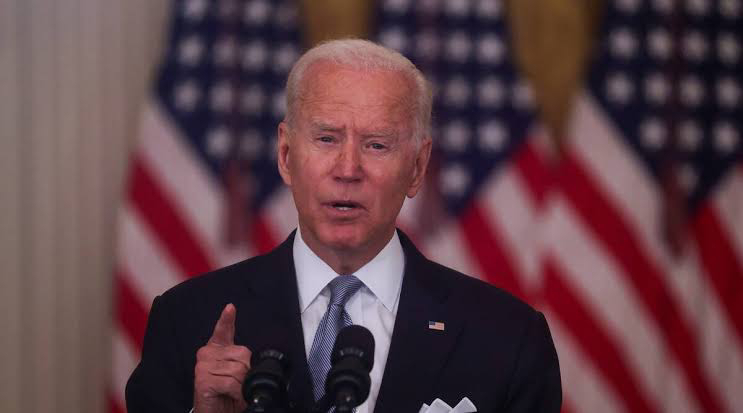 President Joe Biden has said he stands "squarely" behind the US exit from Afghanistan as he faces withering criticism over the Taliban's lightning conquest of the war-torn country.

"How many more American lives is it worth?" asked the Democratic president.

He said that despite the "messy" pullout, "there was never a good time to withdraw US forces".

On Sunday, the Taliban declared victory after Afghan President Ashraf Ghani fled and his government collapsed.

The militants' return to rule brings an end to almost 20 years of a US-led coalition's presence in the country.

Kabul was the last major city in Afghanistan to fall to a Taliban offensive that began months ago but accelerated in recent days as they gained control of territories, shocking many observers.

Mr Biden returned on Monday to the White House from the Camp David presidential retreat to make his first public remarks on Afghanistan in nearly a week.

"If anything, the developments of the past week reinforce that ending US military involvement in Afghanistan now was the right decision," said Mr Biden.

"American troops cannot and should not be fighting in a war and dying in a war that Afghan forces are not willing to fight for themselves."

Mr Biden is facing intense political backlash over the turmoil in Kabul following his April decision to order all American troops out of Afghanistan by 11 September - the 20 year anniversary of the terror attacks that triggered the US invasion.

Mitch McConnell, Republican Senate Minority Leader, tweeted: "What we are seeing in Afghanistan is an unmitigated disaster. The Biden Administration's retreat will leave a stain on the reputation of the United States."

Former US President George W Bush, who authorised the military intervention in 2001, said he was "watching the tragic events unfolding in Afghanistan with deep sadness".

"The Afghans now at greatest risk are the same ones who have been on the forefront of progress inside their nation," Mr Bush said, stressing that the US had "the legal authority to cut the red tape for refugees during urgent humanitarian crises".