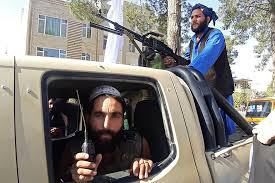 A Taliban spokesman says their fighters have been ordered to enter the city to prevent looting.

Earlier they were told to refrain from violence and allow safe passage for anyone wanting to leave.

Eyewitnesses say the militants met little resistance along the way to the capital.

The Taliban had captured more territory, including the former US airbase at Bagram and the central Bamiyan province.

Meanwhile the US has continued with the evacuation of staff in its embassy in Kabul.