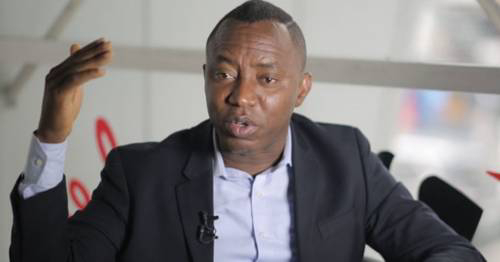 The Coalition of Civil Society has expressed happiness at the release of the Publisher of Sahara Reporters, Mr Omoyele Sowore and others that were arrested at the Federal High Court, Abuja on Monday 26, 2021 during the resumed trial of the leader of the Indegenous People of Biafra (IPOB) Nnamdi Kanu.
The coalition said those arrested were at the court to extend Solidarity with the five young people detained by the order of the Dunamis Church international on 4th of July, who were to appear in the court for their bail application.
Coordinator of the Coalition of Civil Society, Dimeji Macaulay in a statement thanked Nigerians who commenced pressure on Social media to put the security agencies on check.
The statement read in part, "We shall not bow to whims and caprices of the regime.
We can't be ruled like a conquered people, we are doing everything within the law and it's the security agents that are so lawless by continue (sic) harassment of young people for ventilating their anger."
Macaulay condemned the arrest of Mr Omoyele Sowore and other supporters of the detained IPOB leader Nnamadi Kanu at the federal High court in Abuja.
He noted that the country is gradually slipping into military dictatorship, calling on all Nigerians to rise and condemn the act.
The group also recalled that on May 31 Omoyele Sowore was shut with tear gas cannister for joining a protest against insecurity in Nigeria.
Macaulay while insisting that Monday's protest at the high court premises is a legitimate action which was heavily repressed by policemen and the DSS who picked and dumped protesters into a fleet of waiting police vans, added that the action is another example, in a hundred, of the contempt the regime of President Muhammadu Buhari has for the Constitution or the Rule of Law.
The Coalition also said, “We demand a public apology from the Nigeria police and DSS for this ridiculous and unprofessional action taken against Mr Omoyele Sowore, other journalists and IPOB activists  and we ask that proper disciplinary measures be taken on those security officers involved.”
“It’s important for you to note that demonstrations and protests are a global phenomenon and are a part of the development of any society.” Macaulay concluded.
News