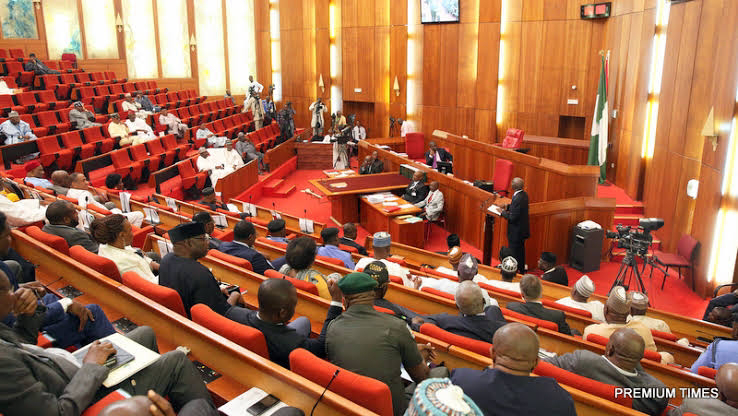 The Senate on Wednesday, approved N2.343 trillion External Borrowing Plan for  financing of part of the deficit authorised in the 2021 Appropriation Act.

This was sequel to the presentation of the report of the Senate Committee on Local and Foreign Debts by the Chairman of the Committee, Sen. Clifford Ordia during plenary.

Presenting the report, Ordia noted that President Muhammadu Buhari had in a letter to the Senate, dated May 6, requested for the authorisation of the implementation of the New External Borrowing.

This is by raising the sum of 6.183 billion dollars provided for in the 2021 Appropriation Act through the issuance of Eurobond in the International Capital Market (ICM).

Ordia said that the amount authorised above may be raised from multiple sources such as the ICM and any other Multilateral or Bilateral sources as may be available.

According to him, as part of the committee’s finding, it noted with utmost importance genuine and serious concerns of Nigerians about the level of sustainability and servicing of our External Borrowing.

“The committee also notes that due to the short fall in our annual revenues in relation to our need for rapid infrastructural and human capital development, we have had to pass deficit budget every year requiring us to borrow to finance the deficit in our budget.’’

In his remarks, President of the Senate, Ahmad Lawan said “this is not a new law. This is a borrowing plan that we approved before for the Budget 2021’’.

“What we have done is to simply provide the necessary resolution that will enable the government to go and borrow,’’ Lawan said.

According to him, our committees should be alive and alert on how the funds that will be borrowed will be put to use.

“No frivolous expenditures should be entertained. I imagine that everybody in the trust of public funds, especially in this loans will be as prudent and as economical as possible.’’

The report was presented by the committee’s chairman, Sen. Opeyemi Bamidele.