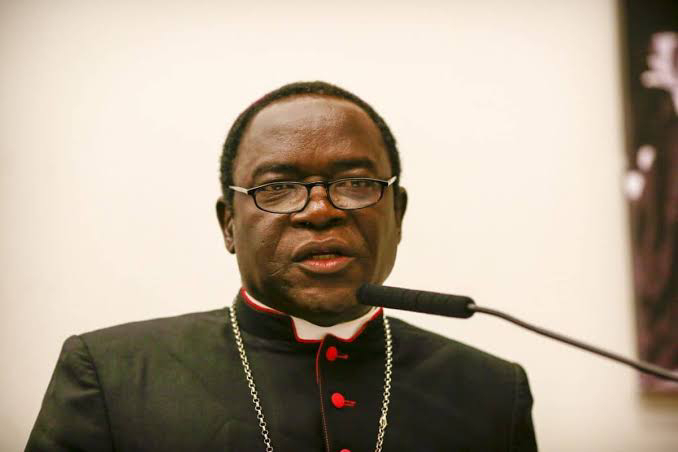 The Presidency has described as unfortunate and disappointing the way and manner Bishop Matthew Kukah castigated his country, Nigeria, before the United States Congress.

A statement by the President’s spokesman, Malam Garba Shehu, on Sunday in Abuja, advised Kukah to desist from sowing discord and strife among Nigerians.

The presidential aide believed that the opinions expressed by Kukah before the US Congress were personal, and not opinions held by majority of Nigerians.

According to him, religious leaders who preach respect for truth have a duty to practice it, and it is a moral and practical responsibility to stand up publicly for the truth.

He said: ”There is no place in mainstream civil discourse for those who actively, negatively, and publicly label an individual ethnic group, especially before a foreign audience.

”These are not the views expressed or opinions held by the vast majority of the citizens of Nigeria.

”For all our challenges as a nation, nearly all of us seek to live together in harmony, celebrating differences, and finding a common ground as Nigerians above all.

”But people like Kukah are doing their best to sow discord and strife among Nigerians.

”More than any other set of people, leaders – in politics or religion who preach respect for truth have a duty to practice it. It is a moral and practical responsibility.

”Going by the history of the Church as is well known, it will stand up publicly for the truth.

”It is time others did the same.”

Shehu described Kukah’s mission statement in the US as a familiar ”overseas political tours that opposition politicians take – visiting foreign leaders and legislators in the United States, United Kingdom and Europe.”

He said such ‘tours’ were meant to attract maximum media attention back home to score cheap political goals.

”So, the argument goes, if they are heard seriously abroad, then Nigerian citizens back home should surely listen to them too.

”But in order to be heard at all, and to maximise media coverage back home for their activities, inevitably these visits involve painting the worst possible picture of our country before their chosen foreign audience.

”Soon enough we inescapably hear an identical list of racist tropes against northerners, how one religion dominates governance above all others, and how the government is doing nothing to address herder-farmer disturbances.

”And how the government spends money on infrastructure to benefit everyone but the group and religion of the speaker.

”Of course, in order not to disappoint their western audience, regardless of fact, the list is always the same-and always slanted for whoever wishes to cross-check,” he said.