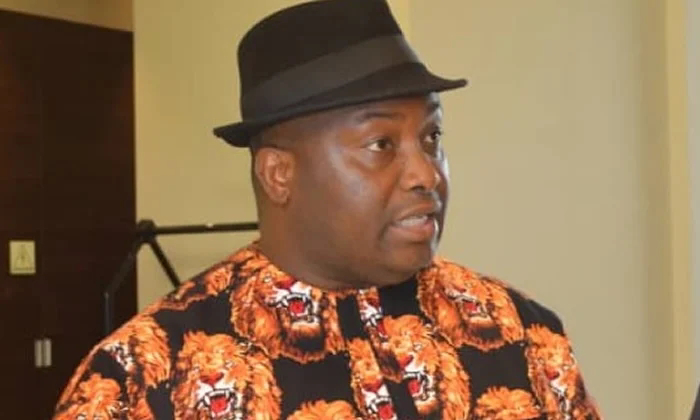 The candidate of the Young Progressives Party in the November 6 Anambra Governorship election, Senator Ifeanyi Ubah, said he staged a walk out of the Senate chamber on Thursday due to the attitude of the Senate President, Ahmad Lawan.

Ubah, who is representing Anambra South Senatorial District, is one of the 28 senators who abstained from the physical headcount over the electronic transmission of election results.

He stated this on Saturday in a statement titled, ‘Setting the records straight on electronic transmission of election results: My Standpoint’.

He said the Senate President frustrated his efforts to raise a point of order over the controversial issue.

He said, “In line with parliamentary practice, I walked out of the Senate Chambers in protest to register my displeasure; hence my absence during the voting session.

“Before walking out of the Senate Chambers, I didn’t fail to tell the Senate President how disappointed I was by his action.

“It is my earnest belief that the use of technology in elections can significantly improve the efficiency and transparency of electoral conducts in Nigeria.

“Undoubtedly, the adoption of electronic transmission of electoral results can serve as an effective/viable solution to the chaotic, manipulative and violently disruptive process that has characterized manual collation of votes in Nigeria.

“Furthermore, I have always consistently advocated that electronic transmission of results directly from the polling unit to INEC’s central server will significantly reduce rigging and brazen manipulation of electoral results at collation centres.

“Conclusively, I wish to reassure my constituents and Nigerians at large of my unwavering commitment to deepening Nigeria’s democracy through the instrumentality of the Legislature.

“I will continue to support and fashion out legislative interventions that will consolidate the democratic gains recorded so far in Nigeria’s electoral process.

“For the purpose of clarity and people spreading misinformation about my purported absence at the Senate Chambers on Thursday; July 15, 2021, please find attached a video of my appearance at the plenary on the same Thursday.

” I wish to unequivocally state that I support and have at all material times, supported the proposed amendment of the Electoral Act to allow for the electronic transmission of results by INEC.

“As a member of the Senate Committee on Independent National Electoral Commission that reviewed the amendment Bill, I championed the cause for the amendment of the Bill to allow INEC to transmit results electronically in line with the wishes of my constituents and my party the; young progressives party.

“During the Plenary, the Senate Leader moved for the consideration of Business Rule 3 which was the INEC Committee report and I rose under Order 43 to make a personal explanation expressing my support for the electronic transmission of votes.

“Unfortunately, I was overruled by the Senate President and denied the opportunity to express my view on the subject matter.”