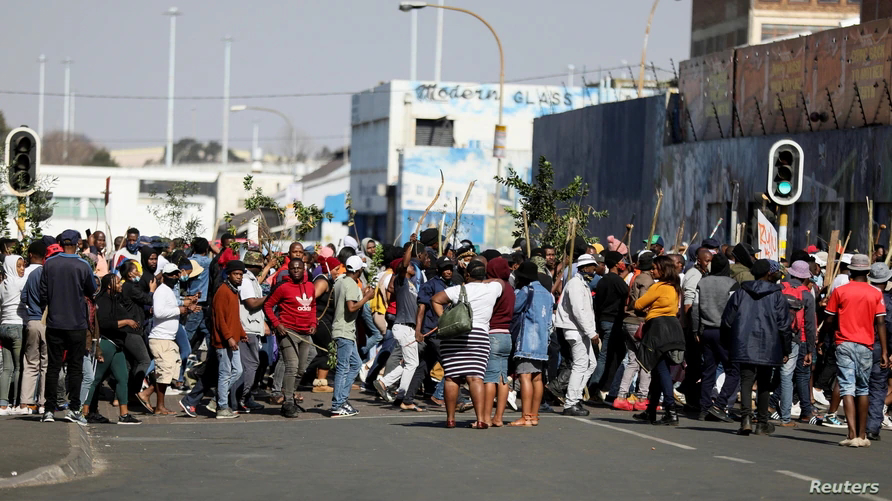 At least 30 people have now died in the violence which has been engulfing parts of South Africa since the country's former President Jacob Zuma handed himself in to police last week.

Almost 800 people have been arrested in the unrest which began as protests following Zuma's jailing on Thursday.

But protests turned violent over the weekend, with fires set, highways blocked and businesses looted.

The military has now been deployed to help the overstretched police.o

Police Minister Bheki Cele told journalists on Tuesday that, if the looting continued, there was a risk areas could run out of basic food.

However, Defence Minister Nosiviwe Mapisa-Nqakula said there was not yet a need to declare a state of emergency over the violence in KwaZulu-Natal and Gauteng provinces.

KwaZulu-Natal Premier Sihle Zikalala said some 26 people had been killed in the province so far, including a 15-year-old boy, EWN reports. Six deaths have been confirmed in Gauteng, news agency AFP says.

Officials have accused some groups of taking advantage of the anger over Zuma's imprisonment to commit criminal acts, while others have said anger over unemployment and poverty are fuelling the chaos.

But Mr Cele warned that "no amount of unhappiness or personal circumstances from our people gives the right to anyone to loot, vandalise and do as they please and break the law".

He also revealed they were investigating 12 people for inciting violence.

There has been some concern over fake news online fuelling the unrest, while the governing African National Congress (ANC) had already revealed it was looking into tweets sent by Zuma's daughter, Duduzile Zuma-Sambudla.

"She will have to answer and explain what her tweets mean and where they're going to lead to," Jesse Duarte, the party's deputy secretary-general, said, according to South Africa's Daily Maverick.

Zuma was convicted of contempt of court last month after failing to attend an inquiry into corruption during his presidency.

The 79-year-old, who denies corruption, was given a 15-month prison sentence. He handed himself to police late on Wednesday.

He is hoping to get the sentence rescinded or reduced by the country's constitutional Court. However, legal experts say his chances of success are slim.