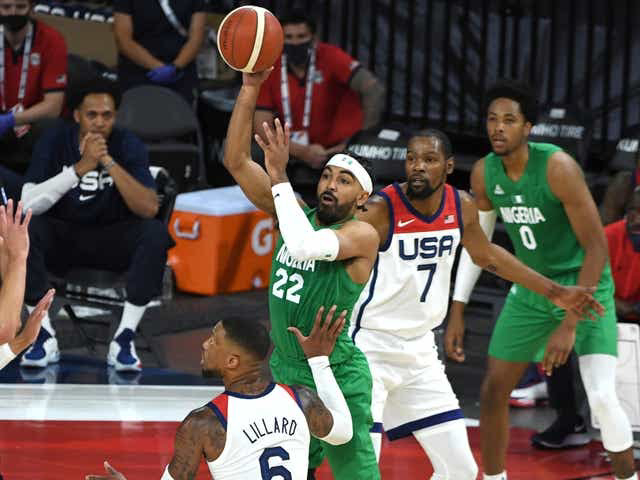 The Nigeria men's basketball team made 20 3-pointers and stunned the United States 90-87 on Saturday in a pre-Olympic exhibition game in Las Vegas.

Nine years after losing to the U.S. by 83 points at the 2012 Olympics, Nigeria never trailed in the fourth quarter. Coached by Warriors associate head coach Mike Brown and featuring eight players with NBA experience, Nigeria made 20 of 42 3s, including six from Gabe Vincent (Miami Heat), who led the team with 21 points (6 of 8 on 3-pointers). Caleb Agada added 17 points, including 3 of 3 from 3-point range.

“Mike’s done a great job with us so far,” Vincent said. “We’ve had a great camp so far. We had to build a new culture, start from the ground up, new plays, new everything. We’ve got a lot of new guys in.

“It’s different when you’re playing for a country. Right now we’re representing the continent. It means the world to us and I hope we showed it here tonight.”

“It’s just all the work we put in," Vincent said. "It’s no mistake what happened here tonight.

“We knew what it was. We’ve all seen them play at the highest level and make huge shots. We knew what came with that and we just had to make plays.”