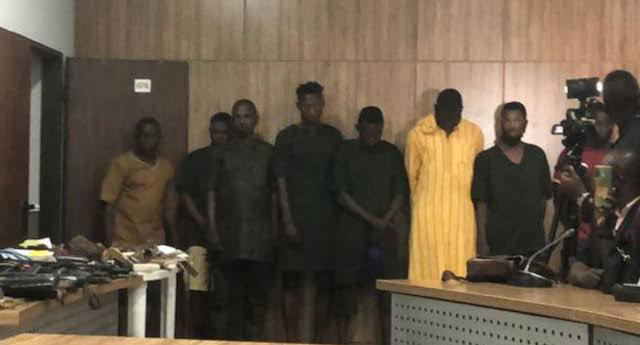 A Federal High Court, Abuja, on Friday, ordered the Department of State Services (DSS) to produce the 12 detained associates of Yoruba nation activist, Sunday Adeyemo, also known as Sunday Igboho, before it on July 29.J

Egwuatu held that this would enable the court inquire into the circumstances constituting grounds of their arrest and detention for not less than 20 days.

He also ordered the Nigeria’s secret police to come and show cause why the applicants should not be granted bail in accordance with the provision of Section 32 of Administration of Criminal Justice Act (ACJA), 2015 and other extant laws of the country.

The judge, who granted the plea of the applicants, through the affidavit of urgency filed on why the matter should be heard expeditiously irrespective of the imminent court vacation, adjourned the matter until July 29.

At least a dozen of Igboho’s associates were arrested and detained by the DSS on July 1 after a raid on Igboho’s residence in the Soka area of Ibadan, the Oyo State capital.

The DSS also said that it “gunned down” two of the activist’s associates during a “gun duel” which Igboho narrowly escaped.

He was later declared wanted for allegedly stockpiling arms, an allegation he denied.

When the matter was called, Olajengbesi told the court that the natter was slated for hearing.

The lawyer, who said the motion was brought pursuant to the ACJA, the constitution of the country and the inherent rule of the court, listed the prayers sought to be granted.

He urged the court to mandate the DSS and other respondents joined in the suit to produce the applicants in court and to show cause while they should not be admitted to bail in consonance with the country’s law.

He said the application was predicated on eight grounds and one exhibit tagged: “Exhibit A.”

According to him, the applicants are Nigeria citizens who are entitled to freedom and have inherent rights, just like others.

Olajengbesi told the court that his clients had remained underground for the past 20 days, and were denied freedom.

He said the applicants were neither given access to their lawyers nor members of their families.

The lawyer, who said the world is watching how the judiciary would vitalise the consciousness of Nigerians, urged the court to grant all the prayers.

“Considering the nature of the application, we also filed affidavit of extreme urgency. We filed an affidavit of non-multiplicity of action.

“We urge you to grant this application in the interest of justice because this is the only place where we can seek refuge,” he said.

The lawyer stated further that everyone, including the respondents, were bound to abide by the country’s law.

According to him, while mindful of the fact that the court is proceeding on vacation, if this matter is not attend to, it will defeat the essence of its filing.

“We seek that this matter be heard during the vacation,” he appealed.