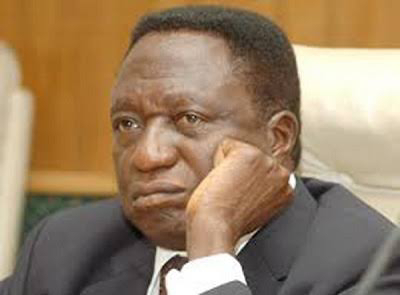 A Federal High Court, Abuja, on Thursday, admitted Prof. Dibu Ojerinde, former Registrar, Joint Admissions and Matriculation Board (JAMB), to a bail in the sum of N200 million with two sureties.

Justice Obiora  Egwuatu, who granted Ojerinde’s prayer after taking the arguments of counsel to the parties in the matter, said one of the sureties must be a professor in a federal university.

Egwuatu ruled that the professor must provide documented evidence of professorship, letter of appointment and staff identity card.

He also said that the other surety must own a landed property in Abuja worth the bail sum and must be verified by the court registrar.

The judge, who ruled that the sureties must produce the evidence of three years tax payment, ordered that the certified true copy of the travel documents of the defendant which were in the custody of a court in Minna, Niger, should be obtained.

He adjourned the matter until July 22 and 23 for hearing.

The News Agency of Nigeria (NAN) reports that the ICPC  in the suit marked: FHC/ABJ/CR/97/21, said that the former chief executive officer allegedly committed multiple frauds, while heading JAMB and the National Examination Council (NECO).

NAN also reports that the court had, on July 6, rejected the defendant’s bail plea after taking his plea on the 18-count charge preferred against him by the anti-corruption commission.

The rejection followed the argument of counsel to the prosecution, Ebenezer Shogunle, that his application for a “temporary bail” was unknown to the law.

The former JAMB registrar, however, pleaded not guilty to all the charges.
Earlier, Counsel to the defendant, Peter Olorunnisola, SAN, informed the court of the bail application dated and filed on June 29.
“The application is supported by an affidavit and a written address,” he said.
He also said that the defence filed an application on July 7 in response to the counter affidavit of the prosecution.
Olorunnisola urged the court to grant his client bail pursuant to Section 162 of the Administration of Criminal Justice Act (ACJA) and Section 35(1) of the Constitution.
Shogunle opposed the bail plea and the judge asked him if Ojerinde was ever granted a bail by the ICPC.
“Yes my lord, we granted the defendant an administrative bail,” he responded.
“Did the defendant breach any of the conditions attached to the bail,” Egwuatu asked.
The anti-corruption agency’s lawyer responded in affirmation.
He claimed that Ojerinde had breached the administrative bail conditions granted to him.
The judge asked him further to describe how Ojerinde acted contrary to the bail terms.
Shogunle then said that after he was granted the bail, he promised to produce some of the suspects listed for investigations, some of whom were members of his (Ojerinde’s) family, but failed to do so.
Justice Egwuatu asked, “So how does that amount to breaching the administrative bail?”
He said the defendant, during one of the interview sessions with members of his family, told the commission to discontinue the exercise that he (Ojerinde) had decided to enter a plea bargain but the plea bargain never worked.
The commission lawyer argued that if granted bail, the defendant would interfere with the investigation as well as intimidate witnesses.
Olorunnisola, who countered him, said the power to grant bail is at the discretion of the court, citing a section of the law.
The senior lawyer further argued that the anti-graft agency had already concluded its investigation on the defendant and keeping him in detention endlessly would not be in the interest of justice.
Delivering his ruling, Justice Egwuatu held that there was no evidence before the court to prove that the defendant jumped administrative bail, interfere with investigation or intimidate witnesses, adding that the prosecution had already concluded its investigation of the matter.
The judge, who acknowledged that a bail is at the discretion of the court, said the court was willing to grant bail in favour of the defendant.
NAN had earlier reported that Justice Egwuatu had warned the ICPC over the manner it was handling the trial.
Egwuatu gave the warning following the inability of the ICPC to produce Ojerinde in court 40 minutes after the case was called.
Shogunle apologised to the court that the officers of the Suleja Correctional Centre, where the defendant was kept, were yet to bring him to the court due to the distance  and the traffic congestion along the road.
He had prayed the court to stand down the matter for about 30 minutes.
Although the judge stood down the matter after counsel to the defendant did not oppose the prayer, Ojerinde was not produced in courtroom more than an hour after other cases were dispensed with.
News