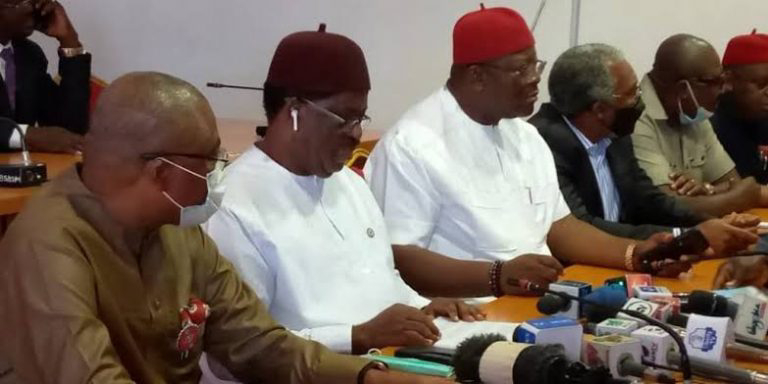 Ebonyi state lawmakers of the People's Democratic Party in the Senate and House of Representatives have accused the state governor, Dave Umahi of arming known cultists, thugs and criminals  to harass and intimate political opponents.
Addressing newsmen in Abuja, the  lawmakers led by a former governor of the state, Senator Sam Egwu alleged that the state governor is carrying out the criminal act following the refusal of all the lawmakers to decamp with him to the All Progressives Congress APC.
Egwu who read a press statement signed by all the federal lawmakers from Ebonyi state said the state governor is hiding under the guise of setting up a regional security network in the East better known as Ebubeagu to create a militia which he uses to fight his political opponents in his former party, the PDP.
He said "as citizens of the Federal Republic of Nigeria, we are alarmed and concerned by the senseless killing of security personnel in the lawful discharge of their duties.

“As it stands today in Ebonyi State, it is impossible to draw a line between the criminal activities of agents of the State Government, and that of other groups.

“Today, Ebonyi State is awash with weapons supplied and distributed by the State Government, to undocumented persons, not trained in weapons handling ostensibly for use against perceived political opponents

“It is important to state here that Governor Nweze Umahi’s resort to arming thugs and Cultists across Ebonyi State is his response to the refusal of major political stakeholders in the State who rejected and refused to decamp with him from the PDP to the APC.

“For this reason, Governor Umahi has decided to procure and distribute arms and ammunition to thugs, cultists and some of his appointees under the guise of vigilante/Ebube-agu to intimidate and stifle the Peoples Democratic Party in Ebonyi State.

“It is for this reason that Ebonyi State has become the first and only state in the South-East to inaugurate and arm the so-called Ebube-Agu.

They revealed that the Inspector General of Police has been written with evidence of how known cultists and thugs have been armed.

The lawmakers decried the attempted murder of a popular politician a few days after he granted a media interview on the ugly developments in Ebonyi State.

"The latest of these heinous crimes is the attempted murder of one Barrister Amos Ogbonnaya, a former coordinator of a Development centre in Ebonyi State.

“The said Barrister Amos on the 4th of May 2021 had appeared on an AIT live programme (JIGSAW) and spoke on the corruption and poor governance activities of the Ebonyi State Government.

“On the 13°” of May 2021, Barrister Amos was kidnapped in his village, Okposi, by a gang led by the Personal Assistant to the Governor named Chinonso Obasi aka “consider” in broad daylight, and operating in a State Government-owned white Hilux vehicle.

“By the sheer act of providence, Barr. Amos was not buried in a shallow grave which had already been dug, but remains incapacitated and at risk of losing both of his legs in a private hospital at Enugu."