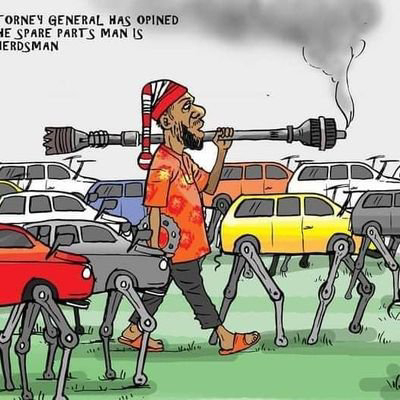 Several highly-placed officials of the Federal Government have brought great embarrassment to this country through their unguarded utterances.

Deputy Speaker of the House of Representatives, Idris Wase, blocked a petition from a section of Nigerians in the Diaspora, saying they had no right to comment on insecurity in the country. Danladi Umar, Chairman of the Code of Conduct Tribunal, slapped a security guard, and his office called those who showed their displeasure at his public misconduct “Biafra boys”. Minister of Communications, Isa Pantami’s past as an Islamic terrorism sympathiser who issued a “fatwa” that led to the killing of a student, Sunday Achi, was exposed. The presidency exonerated him because he had “repented”.

Responding to the recent ban of open grazing by the 17 Southern governors, the Attorney-General of the Federation, AGF and Minister of Justice, Abubakar Malami, said it was illegal and unconstitutional. He was quoted as saying: “It is about constitutionality within the context of the freedoms expressed in our Constitution. Can you deny the rights of a Nigerian? For example, it is as good as saying, perhaps, maybe, the Northern governors coming together to say they prohibit spare parts trading in the North…  It is a dangerous provision for any governor in Nigeria to think he can bring any compromise on the freedom and liberty of individuals to move around.”

The firestorm of outrage and criticisms which followed this shocking comparison and portrayal of Malami’s poor understanding of the Constitution question the Attorney-General’s fitness for that office. He is mischievously or ignorantly imputing that the ban on open grazing is the same as the stoppage of individuals’ constitutional freedom of movement. In truth, it is the stoppage of the movement of cows which destroy farms and is partly responsible for the current food inflation. These nomadic herders do not pay tax. All they do is to destructively trespass into people’s properties which is a felony that should bother the AGF if he were well-meaning.

The ban became necessary because terrorists and hoodlums are hiding among the herders to kidnap for ransom, kill, rape and illegally occupy people’s lands, thus stoking armed resistance. On the other hand, spare parts dealers are peaceful, law-abiding and contribute meaningfully to the economic development of their states of residence. What is the basis for Malami’s sinister comparison?

These and similar utterances by officials of the Muhammadu Buhari administration appear to validate the allegation that the terrorist activities of the herdsmen militias are being officially condoned or even supported.