Gen. Attahiru, 10 Other Officers Buried Amidst Tears in Abuja 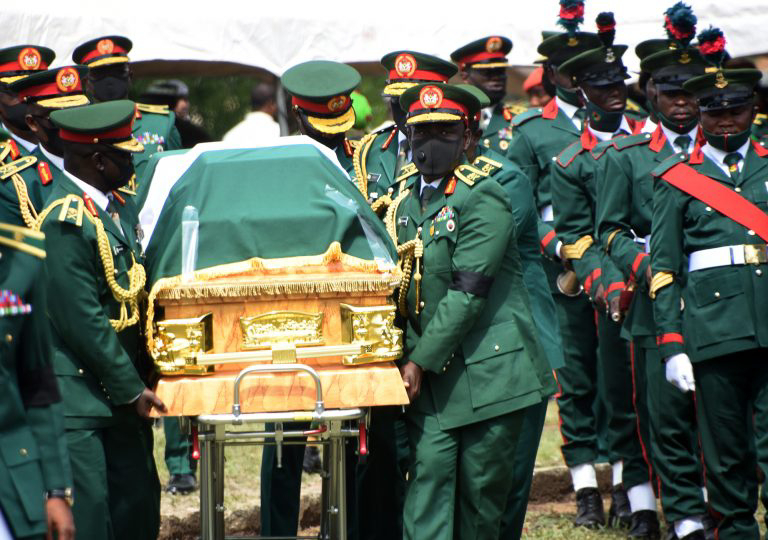 The remains of Chief of Army Staff (COAS), Lt- Gen. Ibrahim Attahiru and 10 other officers, who died in the ill-fated crashed NAF aircraft in Kaduna Friday, were buried in Abuja Saturday.

The News Agency of Nigeria (NAN) reports that  family members, friends, colleagues and sympathisers wept uncontrollably as their remains were laid to rest at the National Military Cemetery Abuja.

The interment followed funeral services at the National Mosque and Nigerian Air Force Protestant Church, after the bodies were received at the Nnamdi Azikiwe International Airport.

President Muhammadu Buhari, who was represented by the Minister of Defence, retired Maj.-Gen. Bashir Magashi, at the funeral, eulogised the late Attahiru and other officers, who died with him

Buhari said that the late army chief was a dedicated and committed officer, who died when his services were most needed.
He said that late Attahiru had demonstrated a high level of commitment as well as inspired courage and confidence in the officers and soldiers of Nigerian army.
“Today is indeed a trying moment for the Nigerian army and indeed the armed forces of our country, a period that witnessed the death of 11 brave officers and men of the armed forces in an ill-fated plane crash in Kaduna.
“These were absolute gentlemen and were one of the most disciplined officers and men who sacrificed their lives in the service of the nation and they will never be forgotten.
“These fine gentlemen had a glorious career in the armed forces in the course of which they served gallantly in several capacities,” he said.