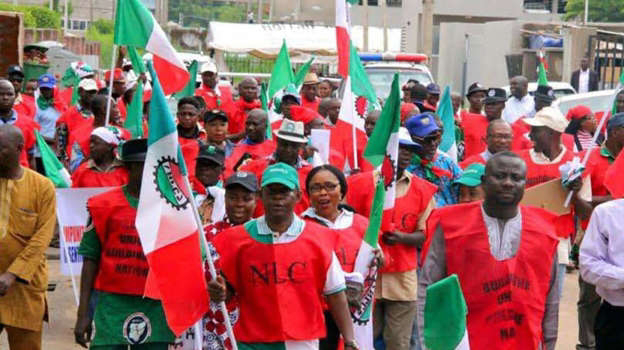 Organised Labour in Nigeria, the Nigeria Labour Congress (NLC) has suspended its five day warning strike in Kaduna State to honour the invitation of the Federal Government tomorrow (Thursday).

Announcing the suspension, the NLC President,  Ayuba Wabba said the decision is to honour the invitation of the Federal Government on Thursday to mediate in the dispute between labour and the Kaduna State Government.

Earlier today, the Minister of Labour and Employment, Senator Chris Ngige waded into the ongoing face-off between the Kaduna State government and labour unions by inviting both parties to a reconciliation meeting.

The meeting scheduled to hold at the Ministry of Labour and Employment in the Federal Secretariat, Abuja is to be attended by the Kaduna State Governor, Nasir El Rufai and top officials of the State; as well as the President of the Nigeria Labour Congress,  Ayuba Wabba and top NLC leaders.

Ngige had directed the two parties to maintain the status quo ante bellum pending the resolution of the issues in contention.

“I am therefore constrained in the exercise of my powers as the Minister of Labour and Employment, under the Trade Disputes Act, CAP. T8, Laws of Federation of Nigeria (LFN) 2004; to invite you and your top officials to the emergency trade dispute conciliation meeting,” he said.

Ngige’s intervention comes three days after the NLC started a protest following the disengagement of over seven thousand civil servants at the state and local governments by the Kaduna State government.

The strike has paralysed critical sectors of the economy in the state and the state governor Nasir El-Rufai in reaction declared the NLC Chairman and other leaders wanted for economic sabotage and attacks on public infrastructure in Kaduna State under the Miscellaneous Offences Act.