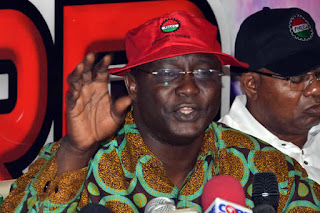 The Nigeria labour Congress NLC has warned the Independent National Electoral Commission INEC to henceforth desist from playing a role in the destabilization of the Labour party.This is contained in a letter to INEC signed by NLC President Ayuba Wabba titled; ILLEGAL NEC; FURTHER SUBVERSIVE ACTS /VIOLATIONS OF SUBSISTING COURT ORDERS.

In the letter, organised labour stated that a purported meeting of the National Executive Council NEC of the Labour Party which took place on Monday, March 29, 2021 in Benin at which Julius Abure and Farouk Ibrahim were said to have been elected Labour Party's national Chairman and Secretary, respectively is illegal, urging the electoral umpire not to recognise the meeting or its outcome.

NLC insisted that the purported meeting and election were in clear violation of the party's constitution which recognises the Nigerian Labour Congress and the Trade Union Congress as the platforms of the party.

It further said that Article 13 (2) (a) further provides that the Presidents and General Secretaries of the two central labour organisations NLC and TUC representing the platforms, the Chairperson of the NLC Women Commission are members of the National Executive Council and the National Convention of the party but yet they were excluded from the meeting.

The letter which was copied to the Director General of the State Security Service further stated; “However, the issue goes beyond exclusion as the so-called NEC represents the continuous commission of the subversion of the party and violation of the orders of the court.

“The Chairman may wish to know that the Labour Party was formed in 2002 by the Nigeria Labour Congress for and on behalf of Nigerian workers. At inception, It was known as Party for Social Democracy (PSD)  However, at its inaugural convention in 2004, it became known as Labour Party, and like Labour Party in other climes, it not only has its roots in the struggles of the working class, it's ideological perspective is shaped by the contents of those struggles.

“Due to disagreements that culminated in the factionalisation of the party and the setting up of a National Caretaker Committee in 2014, a faction of the party commenced suit no. FHC/ABJ/CS/866/2014 between Labour Party & Ors Vs. Comrade Salisu Mohammed & Ors. After a prolonged legal battle, the parties to the dispute agreed to an amicable settlement complete with terms and conditions which were duly filed in court.

“Honourable Justice G.O. Kolawole (now JCA),  in  the consent judgment he  delivered on March 20, 2018,  stated  that the Labour Party (though not a trade union), is an institutional political  party of the Nigerian workers, founded,  funded and promoted by the Nigerian workers through the central labour organisation, the Nigeria Labour Congress in furtherance of the pronouncement of the Supreme Court in INEC vs Musa in which the Supreme Court held: “The provisions of section 40 of 1999 Constitution are clear. Their import is to allow ‘every person,’ including public office holders and civil servants, the freedom to assemble freely and associate with other persons to form or belong to any political party, or trade union or any association for the protection of his interests. The section has made no exception and there is no proviso therein limiting its application to civil servants or public officers.”

“The Justice Kolawole-court ordered the parties to conduct an expansive and inclusive national convention of the party.

“However, serial acts of subversion by A.A Salam (then erstwhile Chairman and now deceased), and Mr Julius Abure (then Acting National Secretary)  and a few others in collaboration with some INEC officials frustrated this process.

“For instance, on October 9, 2018, the said Salam, Julius Abure and their accomplices in utter violation of the orders contained in the  consent judgment, met at Aptec Hotel (with some INEC members purportedly in attendance), Minna, from where they issued a press statement extending the tenures of A.A.Salam and Julius Abure as National Chairman and Acting National Secretary, respectively.

“We recall too that on August 16, 2019, Justice I.E. Ekwo of the Federal High Court had reason to describe the Labour Party as a lawless party owing to the inglorious conduct of  Salam,  Abure and co, aided by some  INEC officials, and would have  made a consequential pronouncement but for the passionate plea of Mr Kehinde Edun, their counsel.  The Honourable Justice nonetheless, adjourned proceedings to February 5, 2020 for the report of the settlement or an address on why the Court should not order the de-registration of the Labour Party.

“In light of the foregoing, we would urge you  to regard the  purported NEC meeting for what it is, sabotage of the internal party governance, violation of the party constitution and SUBSISTING Court order.

“INEC should not validate this meeting or the decisions that arose from the meeting.

“INEC should reflect and resist the temptation to aid or abet any illegality.

“We would have protested to the INEC on this matter a long time ago but for the enormous respect we have for the Chairman. It is our hope that appropriate disciplinary measures will be taken expeditiously. In the absence of this, we would be left with no option than to exercise our right to protest.

“While we await your intervention, please accept the assurances of our highest esteem’’ the letter concluded