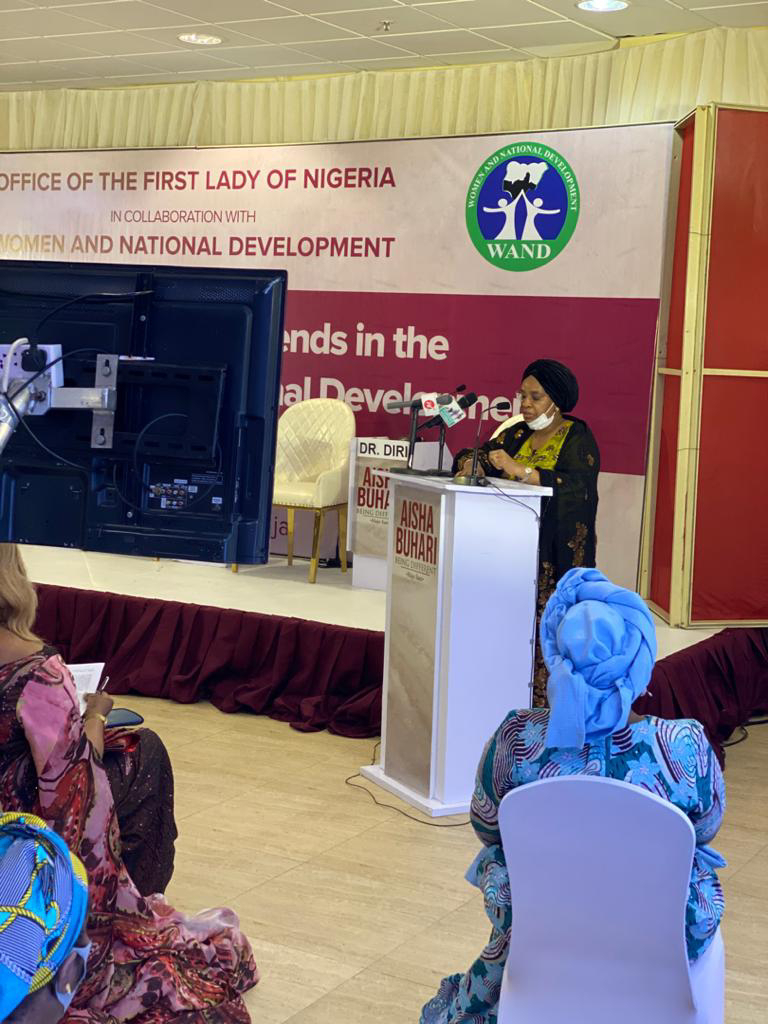 The Special Assistant to the President on African First Ladies Peace Mission, Dr. Mairo Al-Makura has urged African leaders to make the position of First Lady constitutional as Wives of Presidents in Africa have a lot to contribute to the development of their different countries.
Mrs. Al-Makura stated this in her welcome address at the summit on emerging trends in the role of the First Lady in National development which took place at the state house Abuja.
According to her: ''Over time, the Office of the First Lady in Nigeria and indeed Africa has been a subject of debate and even controversy as to their essence. This is especially so given that Africa is a largely patriarchal society and that the First Lady is not elected or stated in the constitution, but only established by conventions emulated from more advanced democracies.
''While more advanced societies, the United States inclusive, have also passed through this phase, we should also note that the American democracy, after which we tailored our presidential system and to which we look up as the guardian of democracy, have increasingly recognised the First Lady as a great source of positive influence for good governance and development if well harnessed.
''Mrs. Clinton played key roles as the First Lady of the United States. She was even appointed by Bill Clinton in 1993 to chair the Task Force on National Health Care Reform. She spearheaded advocacies for expanding health insurance coverage, promoting proper child immunisation, and raising public awareness of health issues. She later became the first ever US First Lady to be elected into the Senate and narrowly lost the bid to become the first female president of the United States.
''In the earlier years of American democracy, Eleanor Roosevelt strongly fought for the New Deal, civil rights, and rights of women. She later played a leading role in the formation of the United Nations at the end of World War II and helped to draft the "Universal Declaration of Human Rights". Rosalynn Carter even sat in on many Cabinet meetings with Jimmy Carter as a close adviser. Betty Ford actively advocated the Equal Rights Amendment and the legalisation.
''Although we still have a long way to go, it is heartwarming that the Office of the First Lady has gradually and progressively evolved in Nigeria and indeed Africa. I must acknowledge the role of former First Lady, the late Dr. (Mrs.) Mariam Babangida, who gave the Office its first real visibility, glamour, and utility. Through the Better Life for Rural Women Programme initiative, which she mobilised the wives of the Military Administrators across the entire States to key into, the charismatic leader redefined the role of First Ladies in national development in Nigeria.
''It is heartwarming that From Her Excellency, Dr. (Mrs) Maryam Babangida’s Better Life for Rural Women to Her Excellency, Mrs. Maryam Abacha’s Family Support Programme; Her Excellency, Justice Fati Abubakar’s Women Rights Advancement and Protection Alternative (WRAPA); Her Excellency, the late Mrs. Stella Obasanjo’s Child Care Trust; Her Excellency, Hajia Turai Yar’Adua’s International Cancer Centre initiative; Her Excellency, Dame Patience Jonathan’s Women for Change Initiative; and Her Excellency Mrs. Aisha Buhari’s Future Assured initiative, which is energetically championing the wellbeing of women, children, and adolescents in the country and making enormous impacts in regard, our First Ladies at both federal and state levels have continued to put their best foot forward, introducing programmes that touch the lives of our people. They have continued to lift millions of our people, particularly women, youth, and children from poverty and diseases.
''Meanwhile, given our realities and the enormous developmental challenges facing Nigeria and the rest of Africa, I make bold to state that we cannot afford armchair First Ladies at any level. We must instead strive to give more meaning to the Office of the First Lady in national development. There is need to streamline, elevate, and institutionalise the Office and interventions of the First Ladies at all levels.
''To this end, it will not be out of place to accord the Office of the First Lady a constitutional mention and enacting a consequential Act of Parliament to that effect to accord it the much talked about legal status and help promote standard and sustainable programmes for the First Ladies. This will also promote accountability and address the present situation where every First Lady comes with her programme, which are not usually sustained with the same momentum after leaving office.'' She concluded.
News