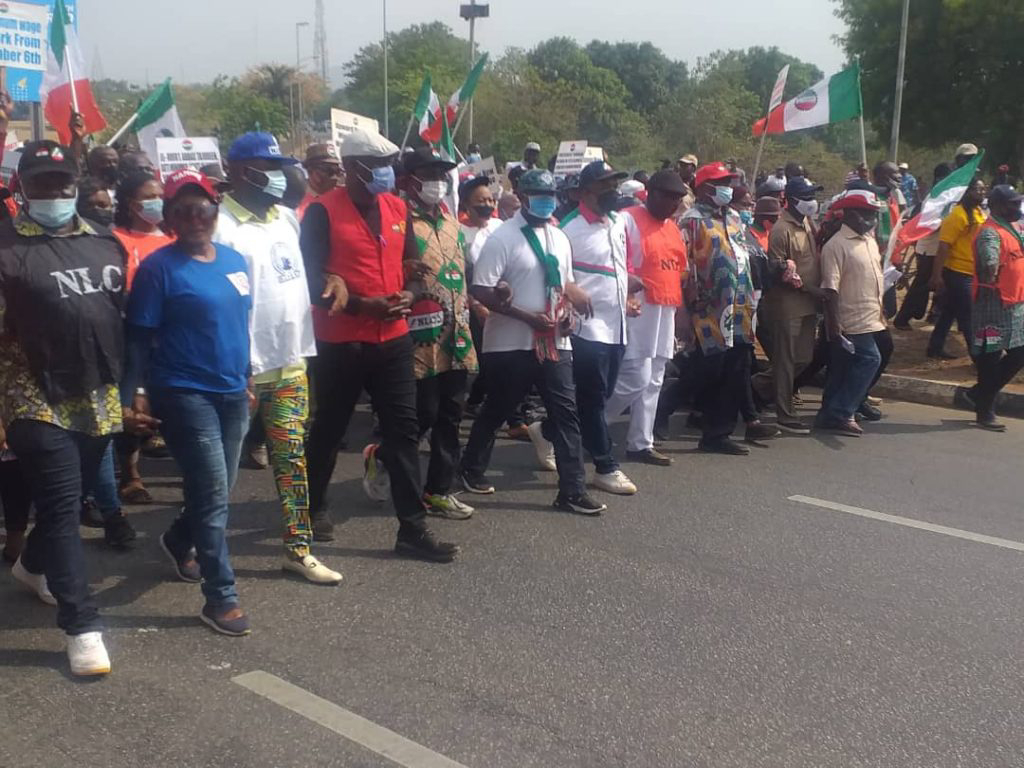 Organized labour in Nigeria has vowed to embark on a nationwide strike if the National Assembly succeeds in passing the Bill which seeks to migrate the national minimum wage law from the exclusive to the concurrent legislative list.
Leaders of the Nigeria Labour Congress and Trade Union Congress made the position known while leading hundreds of workers to the National Assembly to officially complain about the Bill which has already passed first and second reading in the House of Representatives.
The protest was simultaneous in the State Houses of Assembly in the 36 states of the federation.
The protesters carrying placards and banners with various inscriptions opposing the proposed bill, stormed the National Assembly premises where they were addressed by representatives of the joint leadership of the federal parliament.
The Bill sponsored by Hon. Garba Datti, lawmaker representing Sabon Gari federal constituency,  if passed into law, will make it possible for the 36 state governments to fix their own minimum wage.
However, NLC President President Ayuba Wabba and other labour leaders are standing strong in opposition to the Bill, insisting that Nigeria is a member of the International Labour Organisation which stipulates a unified minimum wage in all its member countries.
While accusing Kaduna state governor, Nasir El Rufai and five other unnamed governors of being responsible for the controversial bill, Organized labour rather urged federal lawmakers to insist on the independence of local government councils, state judiciary and houses of assembly which they say have been taken over by the autocratic state governors.
After receiving official letters from labour leaders stating labour's grievances, deputy chief whip of the Senate, Sabi Abdulahi who represented the President of the Senate Ahmad Lawan and the majority leader in the House of Representatives, Ado Doguwa who represented the speaker, Femi Gbajambiamila agreed on the need to review the Bill.
As the workers dispersed after the protest march, a speech made by former chairman of ASUU, Prof. Dipo Fashina during the protest will continue to ring out for Nigerian workers to take their destiny in their own hands.
According to him, the working masses of Nigeria must come together, form a political party and seize power from the current ruling class in order to create a better Nigeria.
News