LEADS-Africa Set To Honour Some Distinguished Ethiopians In Addis Ababa 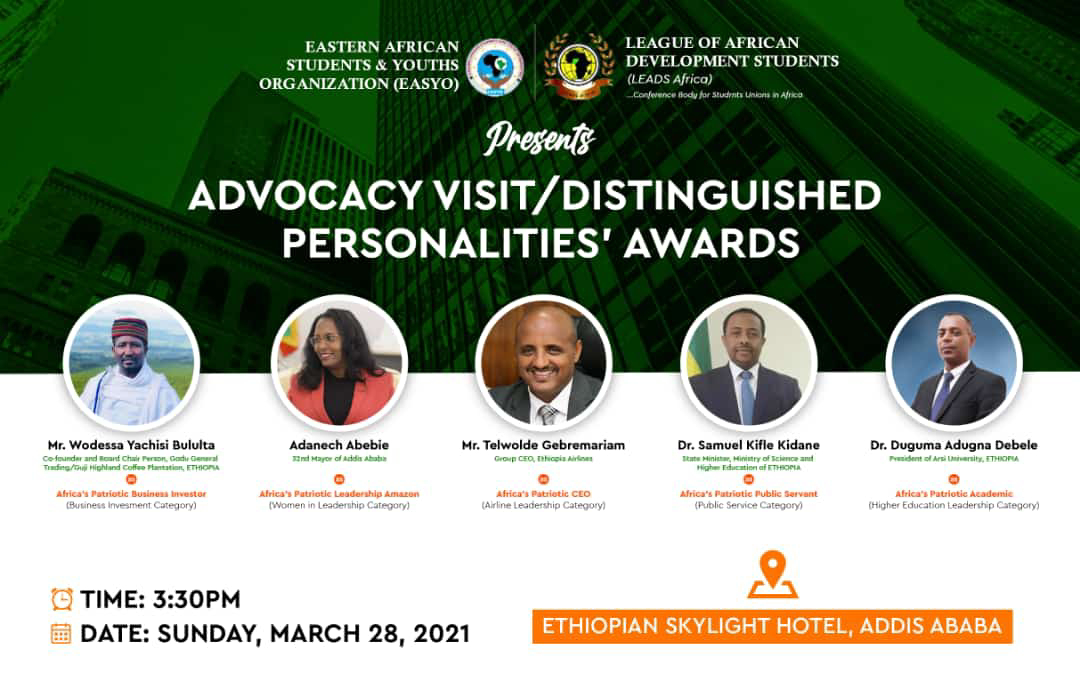 All is set for the grand conferment Ceremony of prestigious honors on distinguished Ethiopians selected from various spheres of life for their contributions to development in Africa at the Ethiopian Skylight Hotel, on Sunday, March 28 2021 – by the League of African Development Students LEADS-Africa based in West Africa, in conjunction with the Eastern African Students and Youth Organization EASYO, based in Ethiopia.
Among African Awardees for the year of Ethiopian extraction are emerging winners from a keen selection process which  includes Wodessa Yachisi Buluta (Business Investment Category) as Africa's Patriotic Investor; Adanech Abebie (Women in Leadership Category) as Africa's Patriotic Leadership Amazon; Mr. Tewolde GebreMariam (Airline Leadership Category) as Africa's Patriotic CEO; H.E. Mrs. Muferihat Kamil Ahmed, Minister of Peace of the Federal Democratic Republic of Ethiopia as Africa's Patriotic Amazon (Women in Public Service Category); Dr. Samuel Kifle Kidane (Public Service for Education Category); and Dr. Duguma Adugna Debele (Higher Education leadership Category) as Africa's Patriotic Academic among others.
Delegates of LEADS Africa from various countries of Africa arrived Addis Ababa – Ethiopia earlier in the week for an Advocacy Visit to the Federal Democratic Republic of Ethiopia to synergize with the leadership of the Eastern African Students’ and Youth Organization EASYO, and other Ethiopian Students' Community; highlight of which will be to honor distinguished Ethiopians who have distinguished themselves in public and private sectors towards the quest for Africa’s development.
According to the Secretary-General of LEADS-Africa – Osisiogu Osikenyi E.K., from Nigeria, the honours were aimed at achieving three major goals which includes, to recognize the Awardees' sterling achievements; to inspire them to do more; and more so, position them as examples to their contemporaries across Africa to emulate their zeal and commitment towards Africa’s quest for development and self-reliance. 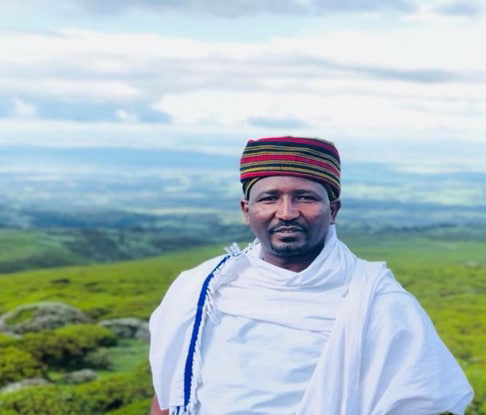 WODESSA YACHISI BULULTA - Co-founder and Board Chair Person, Godu General Trading)/Guji Highland Coffee Plantation, is to be honored as as AFRICA'S PATRIOTIC BUSINESS INVESTOR in careful recognition of his contributions towards economic growth, employment generation, Agro-development, Corporate Social Responsibility; and not undermining his philanthropic strides in awarding several scholarships to students, charity to the less-privileged and general support towards Human Investments viz students/youths in Ethiopia. 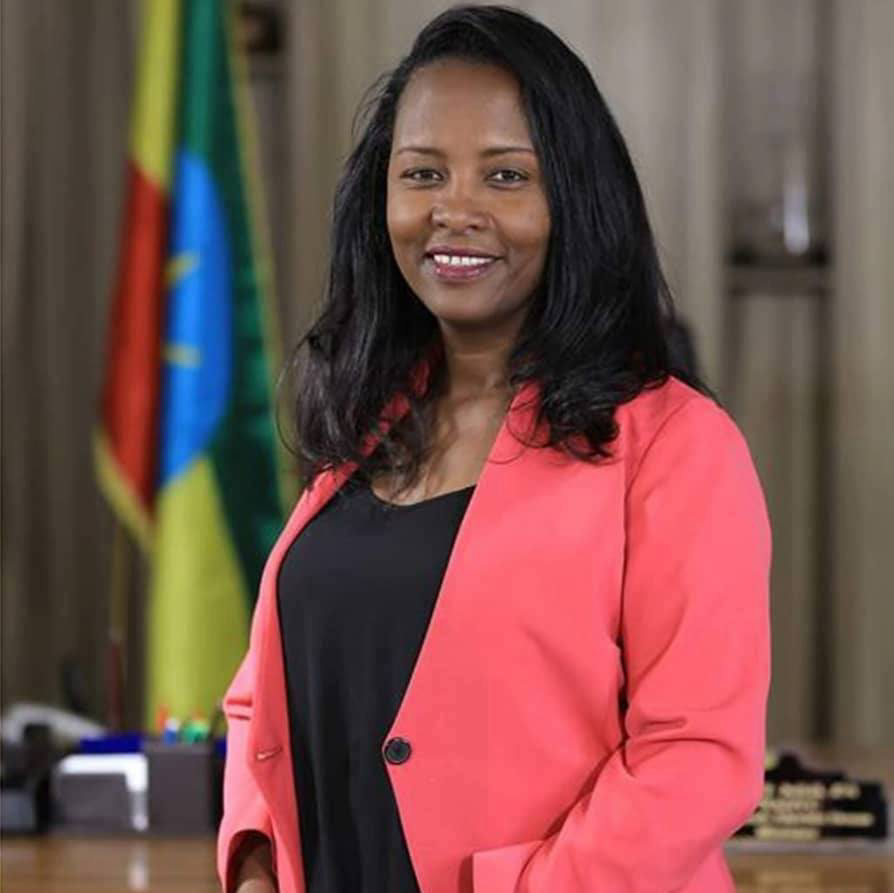 ADANECH ABEBIE – The 32nd Mayor of Addis Ababa and the City’s first female Mayor in over a century who will be prestigiously honoured as AFRICA'S PATRIOTIC LEADERSHIP AMAZON; assumed her present responsibility as City Mayor with immense public service antecedence and experience viz as Minister of Revenue and Customs Authority, Ethiopia from October 2018 to March 2020; subsequently as the Federal Attorney General of Ethiopia; that has among other myriads of assignments, equipped her for outstanding leadership in administering the ancient city with remarkable leadership strides. She is indeed, consistently becoming a positive reference point for Discourse on Success of Women in Leadership in all of Africa today. 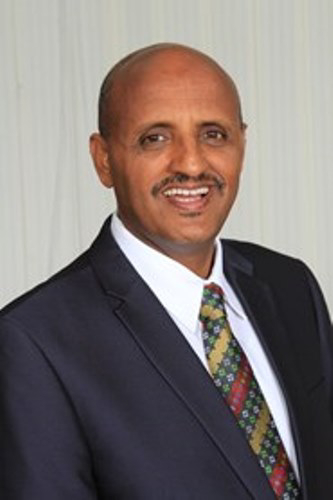 MR. TEWOLDE GEBREMARIAM, has been superintending the consistent success of Ethiopian Airlines as Group Chief Executive Officer since January 2011; coming on the heels of his over three-and-half decades of being part of the Ethiopian Airlines success story from assignments in Ethiopian Cargo, Area Offices, Sales & Marketing to senior leadership positions. Probably owing to his 36year hands-on experience in the Aviation management sector, in addition to a Degree in Economics from the Addis Ababa University in Ethiopia and his Masters Degree in Business Administration from the Open University in the United Kingdom, he has been able to successfully keep Ethiopian Airline prominent in spite of several daunting challenges the industry faced last year; hence he will be honoured for resilience and innovation in leadership as AFRICA'S PATRIOTIC CEO (Airline Leadership Category). 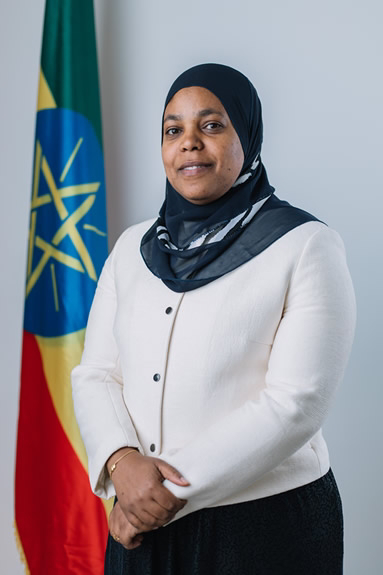 H.E. Mrs. MUFERIHAT KAMIL AHMED, overseeing the Ethiopian Ministry of Peace has made remarkable strides in the salient aspect of proactive peace building via Human Capital Investments, Peace Advocacy and National Intelligence also leveraging on her rich public service antecedence as the first ever female Speaker of the House of People's Representatives; Chair of the Southern Ethiopian People's Democratic Movement being the only woman to hold such political structure of the incumbent ruling party in Ethiopia. H.E. Mrs. MUFERIHAT KAMIL AHMED holds a Master of Arts degree in Transformational Leadership from University of Greenwich, United Kingdom, and has made good this erudition in several positions of national assignment she has been engaged with; contributing her own strategic quota in bringing sustainable peace in Ethiopia, hence will be honored as AFRICA'S PATRIOTIC AMAZON (Women in Public Service Category); 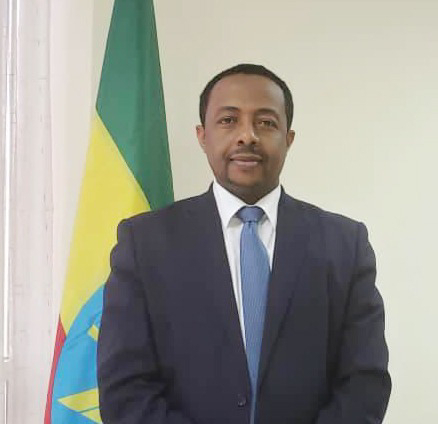 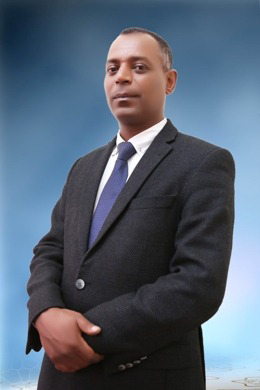 Dr. DUGUMA ADUGNA DEBELE, The President of Arsi University, has consistently shown high level commitment towards availing thousands of Ethiopian young people and other Africans alike, access to qualitative Higher Education in tandem with the mandate of Arsi University; having dozens of scholarly works to his erudite credit in addition to other Ivory Tower engagements, LEADS-Africa has as such identified him for honor as AFRICA'S PATRIOTIC ACADEMIC (Higher Education leadership Category) in due recognition of his immense strides.
Meanwhile, modalities are in place for other categories of Awards to some other equally distinguished Ethiopians such as Ato Genene Ruga - President, Nib International Bank (NIB) as AFRICA'S PATRIOTIC TECHNOCRAT (Finance Development Category); H.E. Mr. Melaku Alebel - Minister of Trade and Industry of Ethiopia as AFRICA'S PATRIOTIC PUBLIC SERVANT (Public Service Category).
While congratulating all Recipients for their honours, LEADS-Africa is urging that all hands must be on deck towards Africa’s quest for development and self-reliance.
News