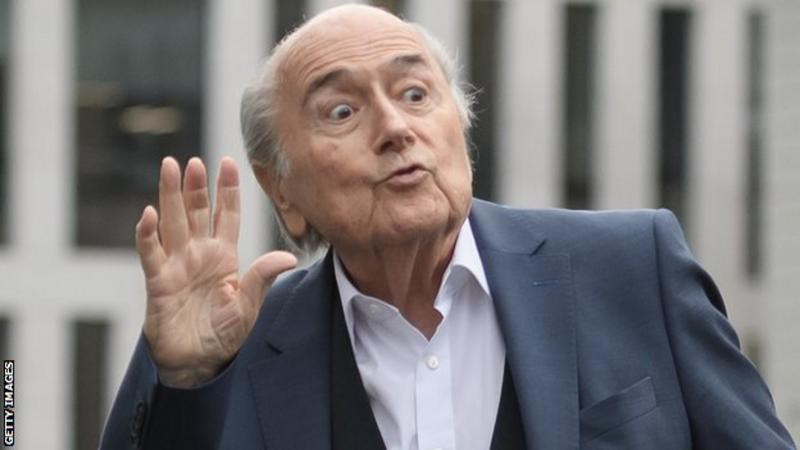 Fifa has banned ex-president Sepp Blatter from football until 2028 after giving him a new suspension of six years and eight months.


Former Fifa general secretary Jerome Valcke has received a similar ban, with both also being fined £780,000.

The punishments were for "various violations" of Fifa's code of ethics.

The new bans start when the current suspensions of 85-year-old Blatter and Valcke, 60, end in October 2021 and October 2025 respectively.

A Fifa statement said: "The investigations into Messrs Blatter and Valcke covered various charges, in particular concerning bonus payments in relation to Fifa competitions that were paid to top Fifa management officials, various amendments and extensions of employment contracts, as well as reimbursement by Fifa of private legal costs in the case of Mr Valcke."

In its findings, world football's investigatory chamber found Blatter accepted "an undue economic benefit" of 23m Swiss Francs (£18m) "split over the years 2010 to 2014, as a result of the conflict of interest created by the allocation and execution of extraordinary bonus payments between limited top-ranking Fifa officials".

It also found that Blatter, Valcke, along with former Argentina football federation president Julio Grondona and ex-Fifa finance director Markus Kattner, had "set up a scheme through which they were allowing themselves to obtain extraordinary benefits with a minimum of effort".

It added: "This vicious circle saw three of them (Blatter, Grondona and Valcke) signing the amendment contracts of the others and approving the respective extraordinary bonuses, while the fourth (Kattner) was in charge of implementing the payment of such bonuses (as well as of keeping the matter "off the books", by not reflecting the bonuses in the Fifa financial statements and not reporting them to the Fifa auditors)."