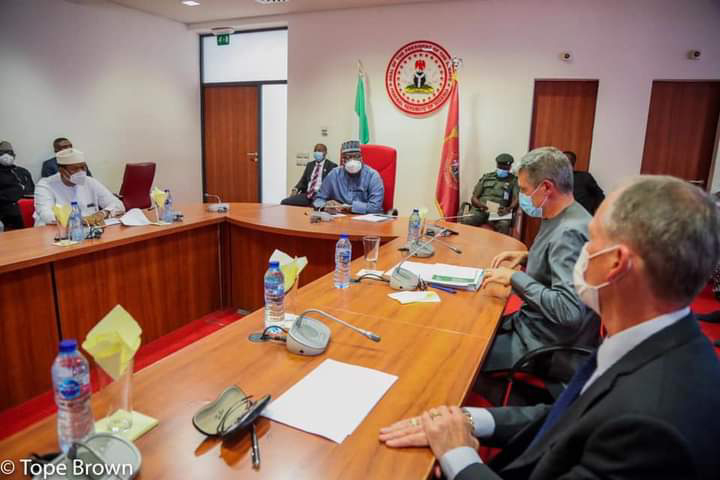 President of Senate, Ahmad Lawan has pushed for a cost reduction in the  production of crude oil by International Oil Companies operating in Nigeria.
According to Lawan, the new Petroleum Industry Bill presently before the National Assembly would accommodate provisions to ensure same when the bill is eventually considered and passed by the end of the first quarter this year.
The Senate President made this known when a delegation of Oil Producers Trade Section (OPTS) paid a visit to his office at the National Assembly on Thursday.
“The cost of production in Nigeria is a major concern in the oil industry. My colleagues in the committees that are oil and gas related know better.
“But from the little I understand, when Saudi Arabia maybe spends $5 dollars (USD) to produce a barrel, we spend about $30 dollars (USD) to produce the barrel in some cases.
“The time has come for us to ensure that the cost of production is beaten down to a more meaningful and profitable production cost.
“I believe that the Petroleum Industry Bill, making provision for funds to go into the host community funds, would probably this time around get us a better deal with the communities.
“We must do everything possible together to ensure that the host communities benefit wherever they are supposed to benefit, not only the host community development fund, but in the Niger Delta Development Commission (NDDC) and other areas of government intervention – the Amnesty Programme and Ministry of Niger Delta Affairs.
“How do the host communities benefit, because we need to stabilize those areas so that we have cheaper production costs,” Lawan said.
The Senate President while stressing the importance of the PIB towards the advancement of Nigeria’s economy, assured that the Upper Chamber would accommodate the interest of international investors operating in the country.
Lawan, however, bemoaned the low influx of business investors to Nigeria, a development which he attributed to the absence of a legal framework which the Petroleum Industry Bill seeks to address.
He said, “In the last 20 years, investments coming into Nigeria and this industry have been so dismal and so small compared to the size of what we have in Nigeria, maybe due to lack of a legal framework – the PIB.
“So, we are very conscious of ensuring a balance and equilibrium between our interest as a people and a country, that we should have all the benefits accruing from your operations.
“We need to help you by creating that kind of environment where you’re able to argue and get the investments flow into Nigerian, instead of elsewhere. Let me also add, that at the end of the day, this is going to be a balanced legislation.”
“For us as a country, we will not do anything that would jeopardize the chances of our oil industry competing favourably with other climes.
“So, I want to assure you that we would look into those issues of concern to you, and we would do exactly what we think will be in the best interest of Nigeria and also in the interest of the OPTS,” Lawan added.
Speaking earlier, leader of the Oil Producers Trade Section (OPTS) delegation, Mike Sangster (Total), said the purpose of the visit was to engage the National Assembly on ways to modify the Petroleum Industry Bill to ensure its success when passed and signed into law.
While extending the delegation’s support to the ongoing effort to provide a legal framework for the oil and gas industry in Nigeria, Sangster prevailed on the National Assembly to accommodate provisions in the PIB that would protect the existing investments of foreign investors.
“On behalf of all of the industry and my colleagues, I want to say that we duly support the government’s effort to drive through the Petroleum Industry Bill.
“We think it is really important that there’s an updated framework for the industry.
“In our view, we are looking for something that will contribute to the Nigeria, which will bring investment to the country and growth to the economy, and obviously jobs to the Nigerian people.
“We are looking for something that will protect our existing investments, and also unlock opportunities so we can further grow our businesses and production.
“We need to find ways jointly to try and reduce what we see as the cost premium of operating in Nigeria, so we are looking at ways where the PIB can help there.
“And I think many people have mentioned over the last few days, the importance of gas to the country, and move of transition towards a diversified gas based economy, let’s say by removing some of the bottlenecks in the value chain and establishing a more free market gas pricing regime,” he said.
Other members on the visiting delegation include: Richard Laing (Exxon Mobil); Rick Kennedy (Chevron); Roberto Daniele (ENI); Sam Ezugworie (Shell); and Bunmi Toyobo (Shell).
News