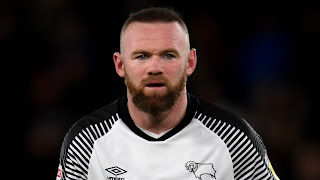 Championship side Derby County have appointed England's record goalscorer Wayne Rooney as their new manager on a two-and-a-half-year contract.

The 35-year-old, who had been in interim charge since Phillip Cocu was sacked on 14 November, has now also officially retired as a player.

"The opportunity to follow Brian Clough, Jim Smith, Frank Lampard and Phillip Cocu is an honour," he said.

"I knew instinctively Derby County was the place for me."

Liam Rosenior takes up the role of assistant manager, with former England boss Steve McClaren continuing as technical director and advisor to the board of directors.

Shay Given will become first-team coach and Justin Walker will remain as first-team development coach.

The Rams are third from bottom in the Championship, level on points with fourth-from-bottom Sheffield Wednesday.

A takeover for the club is expected to go through this week, with a deal between current owner Mel Morris and the Deventio Holdings Group having been agreed in November.