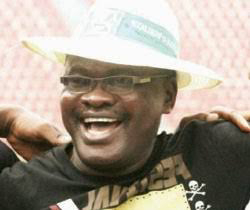 Former Super Eagles goalkeeper, Joe Erico, has died at the age of 71.

A statement from the NFF quoted Erico’s family members as saying that the former assistant coach of Super Eagles complained of body pain and was treated for malaria, “only to be found dead in his bed at dawn” on Thursday.

“It is another sad day for Nigerian Football. Erico was among the very best of Nigeria’s international goalkeepers and also served the country with fervour and diligence as Assistant Coach of the Super Eagles between 2001 and 2002.

“He will be sorely missed. We pray that Almighty God grant him eternal rest and also grant his family and loved ones the fortitude to bear the big loss,” NFF General Secretary, Dr Mohammed Sanusi, said.