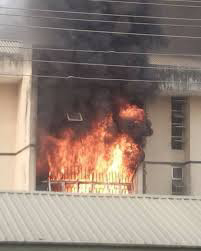 A private radio station, Love 104.5 FM in the Mpape area of Abuja has been gutted by fire, destroying property and equipment worth millions of naira.
The station which is owned by MultiMesh Broadcasting went up in flames around 7pm Friday but no life was lost.
The cause of the fire is not yet known but the Head of News, Akin Oyewole, told this blog that it was likely due to some electrical surge.
Group Managing Director of MultiMesh Broadcasting, Godfrey Ohuabunwa speaking shortly after the fire was put out by the Federal and FCT Fire Service, thanked them for the effort while also commending the Nigerian Police for controlling the chaotic Mpape traffic to allow the Fire Service gain access to the facility.
The Director General of the National Broadcasting Commission (NBC) Armstrong Idachaba was also on ground on a solidarity visit to the station.
News