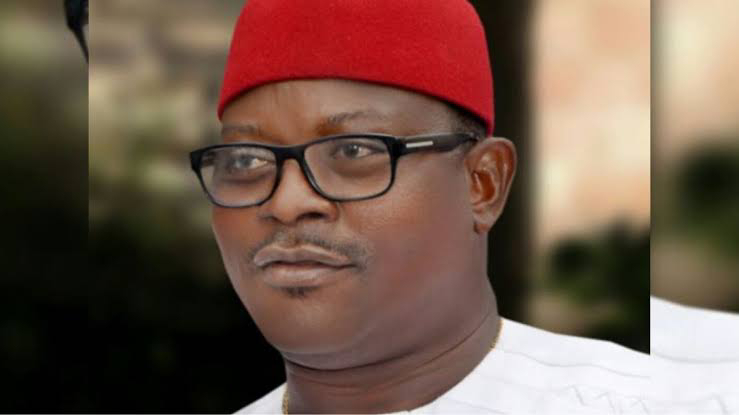 Senator Obinna Ogba (PDP Ebonyi Central) alleged Thursday in Abuja that the Governor of the State, Engineer David Umahi was after his life going by series of threats received from him recently and vindictive actions being taken against him and his political associates.
This as the Governor in a swift reaction through the Commissioner for Information and State Orientation,  Barr. Orji Uchenna Orji, dismissed the allegation as unfounded.
Senator Ogba in a written statement titled: "Unfortunate and  Delusional  Accusations  by Governor  Dave  Umahi", at a press briefing alleged that since Umahi defected to the All Progressives Congress (APC) without vibrant politicians in the State following him, he has resulted to vindictiveness against them.
Specifically according to him, the Governor recently ordered for closure of a private school in Abakaliki owned by his legislative aide on trumped up allegation of the school being used to orhanise cultists.
The Governor, Senator Ogba added, is   also making moves to get his Hotel in Abakaliki demolished for no justifiable reason.
His words:" This press briefing may be termed late given the Governor’s pseudo apology, but the closure of KINGDOM MODEL SECONDARY SCHOOL, by the government (a private school established since 2004) owned by the immediate past PDP Chairman of Ezza South L.G.A, Barr. Friday Agbom (who is also my Legislative Aide) 24 hours after  that apology on a flimsy excuse that he organizes cult activities there further triggered me to make this press briefing.
"It is very unfortunate that innocent and harmless students of the above named school have been forced to taste the bitter pills of Umahi’s maladministration, not minding the fact that the students just came back from a long COVID-19 induced break and have no business with political intrigues in Ebonyi State.
"It is absolutely clear that Governor Umahi is accusing the individuals he mentioned in the cause of his apparently delusional broadcast of conspiracy to murder.
"Specifically, when Umahi accused me and 3 others of engaging cultists and, according to him, some IPOB members to start kilings and instigating crises in Ebonyi State, he thus brings the matter into the central realm of criminal law.  Whether he is ignorant of the crime of joint enterprise to commit an unlawful or harmful act or not, Umahi must put forward the compelling evidence at his disposal that led him to lay such grievous allegations against innocent citizens who were his conveyor belts to his present status as a 2nd term Executive Governor of Ebonyi State.
"Speaking for myself and by way of rebuttal, I wish to state categorically that I have never harboured, recruited, induced or engaged cultists for any purpose whether political or otherwise, in all my personal and public life.
"The record of Umahi’s history of violence and threats of violence abound in the public domain. Recall that the governor and his brother Austin Umahi sent me threat messages on the 14th of January and 16th of August respectively, warning me to watch my back.
"Later the governor called me the he would demolish my hotel at Dr. Offia Nwali Street, Abakaliki.  Therefore, when a man with such a history, combined with his insatiable greed to cling unto power makes these sorts of dangerous and thoughtless utterances, then he must be taken seriously.
"It is important to state here that should anything happen to me or any member of my family, governor Umahi should be held responsible. Umahi should note that the gentility of the tiger does not mean weakness.
"The office of Governor has always appeared too large for Umahi. He has always appeared too egocentric, ill-prepared, under confident, timid and yet boastful for that office.
"As he is lashing out at those far superior to his disgruntled self, we must urge the security agencies to keep a watchful eye on him. He portends clear and present danger to Ebonyi State and the political class".
But Governor Umahi in his reaction to Senator Obinna Ogba's allegations, through a statenent signed by his commissioner for Information and State Orientation, Barr. Orji Uchenna Orji, said the senator was crying foul over
non- existent and imaginative allegations.
The statement reads in part: "We as government are not interested in responding to his allegation which I take as very unwarranted, scandalous and irresponsible.
"The Governor  of Ebonyi State His Excellency Engr Chief David Nweze Umahi FNSE FNATE has moved forward in his quest to allow peace reign no matter the level of distraction and provocation by detractors.
"The Governor has publicly directed all government officials not to abuse anybody or take any unjustifiable actions against anybody.
"I will advise Senator Ogba to respect the opinion of the people that elected him and play his politics in line with conventions.
"Our Government is not distracted at all. When Politics comes, we shall play it very well. We wish him
well".
News