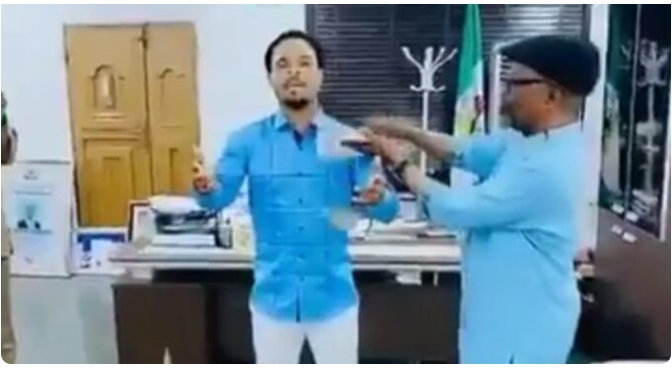 Okezie Ikpeazu, governor of Abia state, has suspended Anthony Agbazuere, his chief of staff (CoS).
A video of Agbazuere spraying money on Odumeje, the ‘Indaboski’, is trending online.
In the video shared on Twitter, Agbazuere is seen spraying naira notes on a dancing Chukwuemeka Ohanaemere, better known as Odumeje, controversial Onitsha-based clergyman.
The date the video was shot is unknown but it appears to have been in Agbazuere’s office.
In a short statement on Sunday, Chris Ezem, secretary to the state government, announced that the CoS has been suspended immediately.
”Abia State Governor, Dr Okezie Ikpeazu, has directed the immediate suspension from office of the Chief of Staff to the Governor, Dr ACB Agbazuere,” he said.
TheCable
News