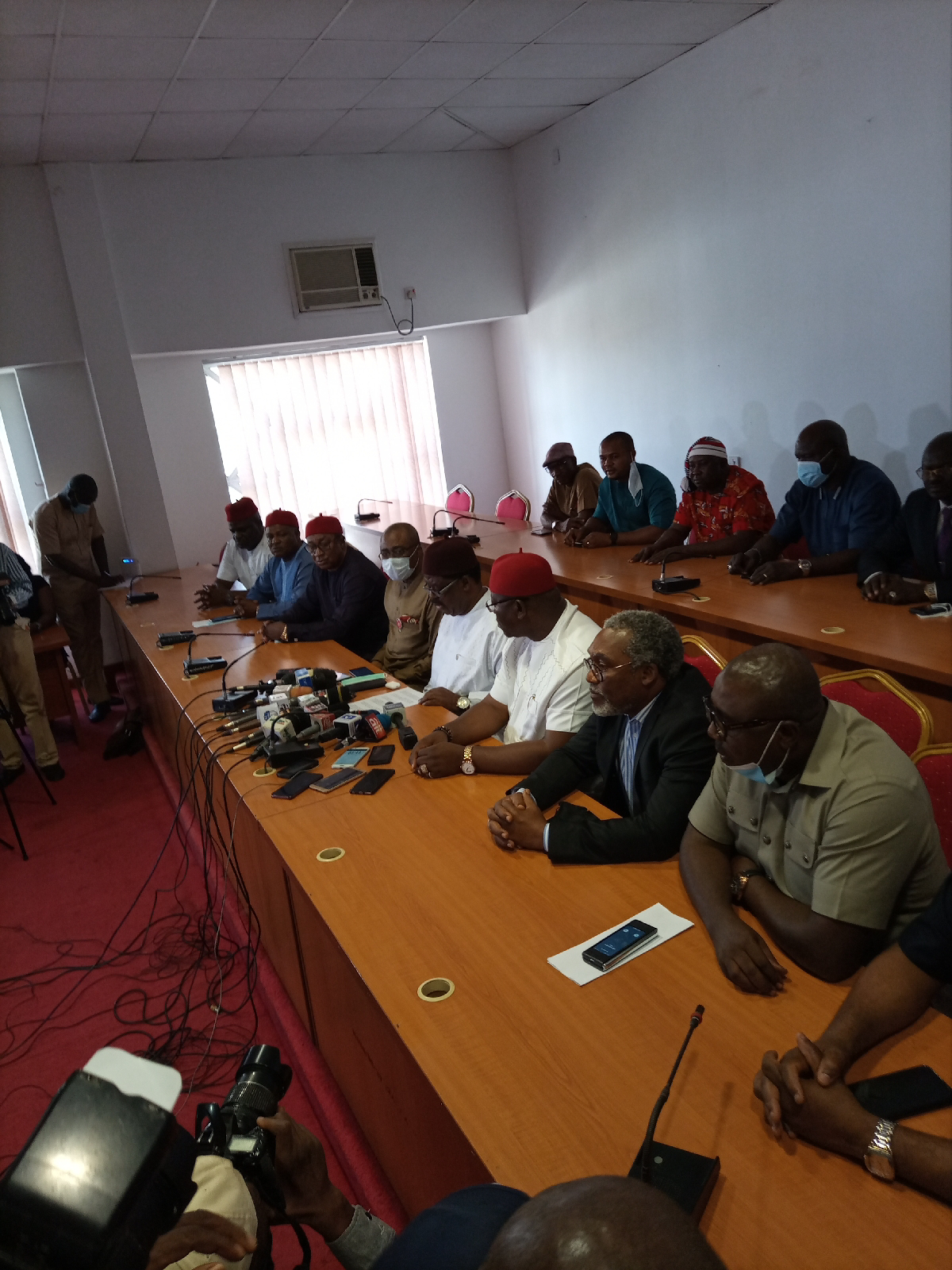 Ebonyi state members of the People's Democratic Party (PDP) in the Senate and House of Representatives have vowed to remain in the party despite the defection of the state Governor, Dave Umahi from the party to the ruling All Progressives Congress (APC).
One of the reasons given by the governor for his defection is that the South East region had suffered what he describes as injustice in the PDP.

Umahi contested for the office of the Governor in Ebonyi State in 2015, on the platform of the PDP and won.

Upon concluding his first term, he was re-elected in 2019, also on the platform of the PDP.

Addressing newsmen at the National Assembly, former Governor of Ebonyi state and Senator representing Ebonyi North Senatorial District, Sam Egwu in company of the Senate minority leader, Enyinnaya Abaribe, and the two other Senators from Ebonyi state, including their counterparts from the House of Representatives, said the reason given by Governor Umahi for defecting to the APC is untenable as he and his family members had attained great political heights on the platform of the PDP.

A statement signed by the PDP Ebonyi caucus members and read by Senator Egwu said; ''for the sake of clarity, we wish to state that not a single member of the Ebonyi State PDP caucus of the National Assembly is defecting to the APC.  The three Distinguished Senators and five House of Representatives members remain proud card-carrying members of the Peoples Democratic Party (PDP), the platform under which we contested and won elections in 2019.

''The major reason given by Chief Umahi for defecting from the PDP to the APC is now in the Public domain which is that the PDP has not been fair to the People of the South East on the issue of zoning the Presidency and vice Presidency.

''While we support that it is the turn of the South East to fly the Presidential flag of any of the major political parties come 2023, yet we consider it impolitic, indecent and unwise to give ultimatums and conditionalities in a bid to secure zoning.

''Indeed, if there is any Ebonyi person who should remain eternally grateful to the PDP, that individual ought to be the Governor David Umahi; a man who was appointed the Ebonyi State Chairman of the PDP, made deputy governor of a PDP administration, and was elected for two terms under the banner of the PDP.  As Governor, his two younger brothers were elected to principal offices of the PDP; one (Mr Austine Umahi) as the National Vice Chairman (South East) and another (Mr. Maxwell Umahi) as the Deputy State Chairman of the PDP.

''As democrats, we concede Chief Umahi’s right to join any political association of his choice.  However, as Federal Lawmakers we are not unaware of the Supreme Court decision that candidates are products of political parties.  What it means is that political office holders are not at liberty to migrate from one political platform to another, particularly when there is no division in their party.

''We wish to use this opportunity to thank the leadership of our great party, the PDP for their prompt action in dissolving the ward, local government, state and Zonal structures of the party in Ebonyi State, and their announcement of a state caretaker team.  We also wish to thank teeming members and supporters in our various constituencies who have remained undaunted and committed to their membership of the PDP.  We also wish to thank the South East caucus, and indeed the entire PDP family of the National Assembly''.