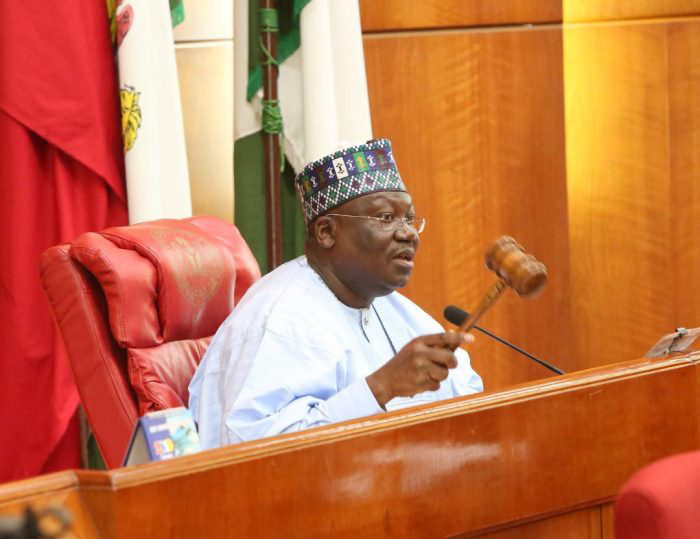 President of the Senate, Ahmad Lawan has urged Pakistan to assist Nigeria in the capacity building of her Defence Industry.
Lawan made the appeal on Friday while receiving in audience a delegation of the Senate of Pakistan which visited him to seek Nigeria's support for the candidature of the Chairman of the Pakistani Senate for the Presidency of the Inter-Parliamentary Union(IPU).
The Senate President thanked Pakistan for its assistance in the area of training and supply of weapons to Nigeria Armed Forces to fight insurgency and other security challenges.
"But one area that I think we need to sustain collaboration and partnership is in the area of helping Nigeria to build our Defence Industry.
"We started together in the 70s. For some reasons, we are still struggling to get stronger in the area of manufacturing or producing our needed defence weapons.
"But you have gone higher. We need to learn a lot from you in that respect.
"We have the Defence Industries Corporation of Nigeria located in Kaduna. They are still working hard to see how they can start producing the kind of weapons that we need in Nigeria. It's going to take a while but I believe that you will graciously help us build the capacity of the people working in that place," Lawan said.
The Senate President said the friendship between Pakistan and Nigeria which dated back to Nigeria's Independence in 1960 had transformed into brotherhood.
"In all international fora, Pakistan and Nigeria have always been on the same side. Pakistan has been quite supportive of Nigeria in all ramifications.
"Presently, we do a lot together for our security especially the Armed Forces. You also help us with some of the weapons that we need in fighting the insurgency. We appreciate that and we hope that this kind of relationship and brotherhood will continue," Lawan said
On the primary reason for the visit, the Senate President said the issue of the candidature of the Chairman of the Pakistani Senate, Muhammad Sadiq Sanjrani for the presidency of IPU "is like one of us running for that office."
"We will give him the support that he needs from us and if we can go beyond what we can offer as an institution to other areas including the African jurisdiction, we will do so, trying to talk to as many of our colleagues in other jurisdiction within the African region, to see if we can get them on board as well.
"But he is eminently qualified. He's vastly experienced and Pakistan has been quite prominent and visible in the activities of IPU.
"What we require is reforming IPU to make it more robust and vibrant and also provide opportunity for supporting the various chapters across the globe. And I believe that with his experience and expertise, he will be able to do that and for us he has no problem. He has our support."
Earlier, the Chairman of the Pakistani Senate Committee on Foreign Affairs, Senator Mushahid Hussain Sayed who led the delegation said the mission was basically to seek the support of Nigeria's Senate for the candidacy of the Chairman of the Pakistani Senate, for the presidency of IPU.
"The election is scheduled to hold in the first week of November. We feel that Nigeria's support will be very critical and because Nigeria is a very important player in the international scenes and in particular with reference to Africa.
"It is in that spirit that we have come personally to solicit your support. And we hope that, God's willing if we are successful, we will be voice, not just for Asia/Pacific, but the voice of Africa and democratic and civilised community of nation's," Sayed said.
News