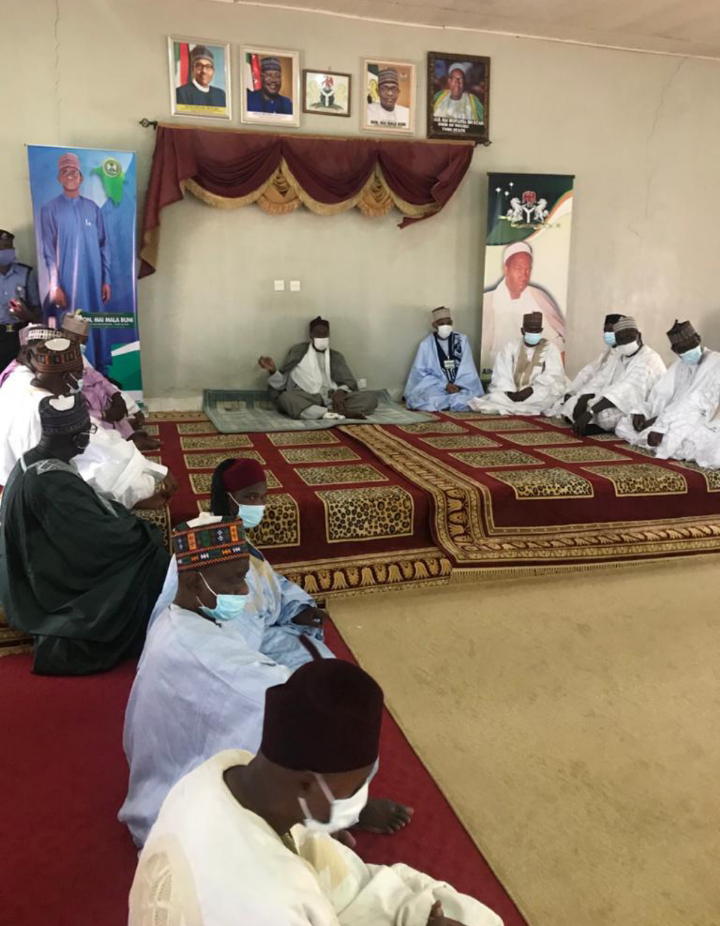 Some serving and former lawmakers from Yobe State have commended the Senate President, Ahmad Lawan for assisting some underprivileged youths and orphans in Yobe State to realise their dreams of getting married.
The lawmakers also lauded Lawan for his thoughtfulness in considering the new couples for skill acquisition programme which will empower them to stand on their own.

They made the commendation at the weekend at a mass wedding conducted for another batch of 100 couples at the Central Mosque, Nguru in Yobe State.

The new couples were from Nguru and Karasuwa Local Government Areas of the State.

Speaking at the ceremony on Saturday, former Majority Leader in the House of Representatives, Hon. Sani Dahiru Elkatuzu, described the mass wedding and skill acquisition Programmes by the Senate President for the poor as impacting positively on the lives of the youths in Yobe North.

According to him, this has made them embrace responsibilities that come with marriage and caused them to shun a life of crime and violence which they otherwise would have turned to due to hardship and unemployment.

“We believe that most of the problems we are having with the youths around here is because they cannot afford certain basic things of life.

“Part of it is, if they cannot afford to have families of their own when they are ready to get married, and because of financial difficulties, then it becomes a problem.

“That is why I believe the Senate President decided to assist in this regard. From experience on the one conducted in Bade and Jakusko, the people are really impressed and happy that this is happening.

“It did not only stop at getting them married, the Senate President also went ahead to train and empower them with skills with which they can fend for themselves and their families.

“Any effort that can reduce the number of unemployed youths from the streets is definitely a step in the right direction, and that is exactly what is happening here.

“A lot of our youths are getting married and trained in skills to enable them secure for themselves the basic necessities of life. It is commendable, and everyone in the society is praising the Senate President for this,” Elkatuzu said.

He added that with the replacement of rural provisions by urbanization needs, there is a gap created which the Senate President’s skill acquisition programme seeks to bridge by ensuring the youths within the various constituencies have access to requisite skills needed to cater to their basic needs.

According to the former lawmaker, most of these youths in the past before the the intervention programmes of Senate President Ahmad Lawan, were considered ideal candidates by Boko Haram for recruitment.

“Culturally, those of us around here in the North East feel as long as you’re not married, you’re still a child and the responsibility of your parents and extended family.

“Now, one cannot attain full responsibility in life if he does not work and have a family of his own. And in order to make this young men responsible, we have to get them married.

“This is a cultural issue, as you’re not considered responsible if you don’t have a family of your own. Therefore, what the Senate President is doing is making them responsible by helping them have families of their own.

“In addition to that, a lot of the means of livelihood are gone because they are supposed to be based on rural provisions. Now, we have urbanization in place and people do not have the required skills to engage in trades that are associated with urbanization.

“The kind of skills that are being impacted on these young men are the kind that will keep them up to date with the realities of modern day society.

“Also, most of our young men do not have businesses or skills that would afford them to make decent living, and that is why they are prone to the Boko Haram recruitment.

“But with the kind of skills they are getting now, you will realize they don’t get recruited. They have shunned all forms of violence and they are no longer likely to be recruited because they now have a trade of their own”, he said.

Speaking at the Emir of Nguru’s Palace moments before the couples were wedded at the Nguru Central Mosque, the Speaker of the Yobe State House of Assembly, Rt. Hon Ahmed Lawan Mirwa, lauded the Senate President for fulfilling the promise made to the youths during his Campaigns ahead of the 2019 elections.
News