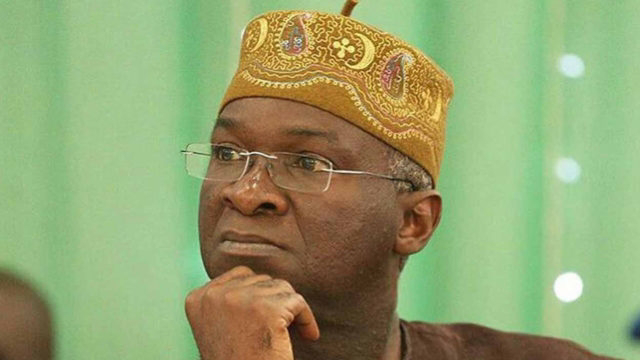 The Federal Government is currently owing construction firms handling 711 road projects across the country, N392billion  said the Minister of Works and Housing, Babatunde Raji Fashola.
The N392billion debt according to the Minister, is  far higher than the N276billion, proposed as budgetary allocation for road projects in 2021.
Fashola who stated this in Abuja during budget defence session before the Senate Committee on Works, said "with the situation on ground, a stop has come for new projects and need for prioritizing of existing ones towards achieving completion of some  of them.''
Accordimg to him, the sum of N6.62trillion is needed by the governnent for funding the 711 road projects across the country but resources for that are not available now which makes prioritizing very important.
"We do not have the resources that we need to fix our road infrastructure at once . The very reason why we need to prioritize what want to do.
"The situation on ground requires us to cut our coat accordimg to our cloth and not according to our size because no good will come out of more new road projects now", he said.
He however explained to the committee that in order to remedy the situation, the 711 projects have been categorized into four different areas of funding and  execution.
The first of such categorization he said is the Highway Projects Financed with Presidential Infrastructure Development Fund (PIDF) which covers projects such as Lagos - Shagamu - Ibadan dual carriage way, 2nd Niger Bridge and rehabilitation of Abuja - Kaduna - Kano dual carriage way.
The second of such categorization according to the Minister, are Highways Projects Financed with the Sovereign Sukuk Fund totalling 44 roads across the six geo- political zones.
Third in the categorization the Minister added, are Highways Project Financed under Tax Credit some which are ÷ Lokoja- Obajana - Kabba - Ilorin road,  Apapa - Wharf Road in Lagos State, Apapa - Oworonsoki - Ojota Expressway etc.
Those in the fourth category he stated further,  are  Highways  Projects  funded from Multilateral Loans.
He specifically informed the Federal lawmakers that the Ministry has given priority to 18 roads/bridges projects that have already attained some appreciable physical achievement for completion within a 12 -15 months period ( December 2021).
When the Chairman of the Committee, Senator Adamu Aliero (APC Kebbi Central), suggested to the Minister, the need to look at the fund in the National Pension Commission (PENCOM), to fund some of the road projects, he said he was not in a position to do that.
"The Central Bank of Nigeria (CBN) seems to be in the best position to work out such arrangement.
"It will be helpful if that type of funding can be put together", he said.
News