#EndSARS: Senate Urges Intervention of all Nigerians to Halt Protests 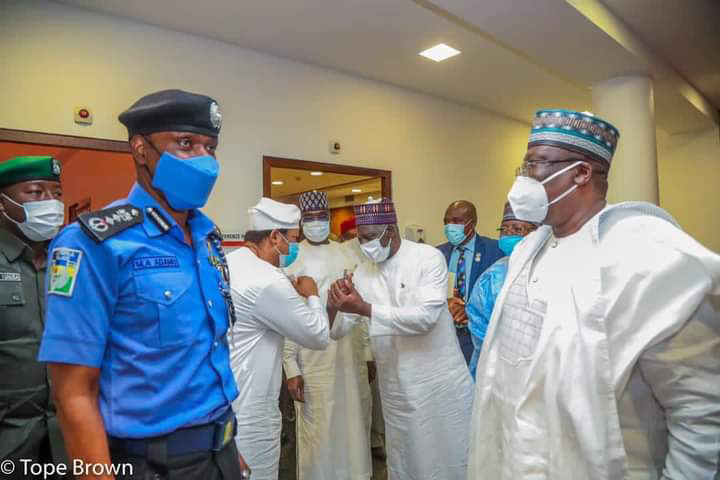 The leadership of the Senate on Wednesday called on all well meaning Nigerians to intervene in the ongoing demonstrations across the country with a view to halting the #EndSARS protests.
The President of the Senate, Ahmad Lawan made the call after he and the other principal officers of the Senate received security briefings on the protests being staged in some parts of the country.
A statement signed by Ola Awoniyi, the Special Adviser(Media) to President of the Senate said the Inspector-General of Police, Adamu Mohammed and the Director General of the Department of State Services, Yusuf magaji Bichi were in attendance.
Shortly after the meeting that held in the office of the Senate President, Lawan told reporters that the time had come for the protests to stop and appealed to all Nigerian political and religious leaders to stand up with a view to prevailing on the protesters to allow peace a chance.
"I want to thank all Nigerians for the prayers and I want to urge opinion leaders and political leaders across the spectrum that this is of utmost concern to all of us.
"All leaders, regardless of their political affiliations, regardless of our religious passuasion, regardless of our geo-political locations, we must stand up and ensure that these protests come to an end because the protests are now taking a different dimension from the originally conceived protest by those who meant well by asking for SARS to be disbanded.
"Those that are going about protesting have shown clearly that they have no affiliation, no relationship whatsoever with the original #EndSARS protest.
"I will take this opportunity to urge all well meaning Nigerians that this is our country, that everyone must show interest in its survival and in its peace.
"This is a country that we have to ensure that it works for all of us. People have the right to say this is not the way they want to go once it is a legitimate way to express themselves through peaceful protest but we must never allow ourselves to be taken in the wrong direction of violent protest like we have witnessed in some parts of the country," Lawan said.
The Senate President told reporters that the leadership of the Senate invited the IGP and the DG of DSS for a briefing on the current situation of the #EndSARS demonstration going on in many parts of the country.
Lawan said "this is for the leadership of the Senate to be properly informed of the situation. But before then, we have been reading in the media, both Electronics and Print what has been going on.
"We have been talking, discussing, consulting with our colleagues in the Senate, in the National Assembly generally and people on the Executive side of government and outside of government on how best we can approach this issue, this challenge, so that we are able to bring it to an end.
"The Senate took two motions so far with respect to the #EndSARS protest. One motion was sponsored by Senator Oluremi Tinubu two weeks ago and the Senate passed resolutions, of course, supporting legitimate and peaceful protest to #EndSARS and urged the security agencies to provide safe environment to protesters.
"The second motion was taken yesterday(Tuesday), sponsored by Senator Biodun Olujimi and of course, co- sponsored by all the Senators in the Senate. Far reaching resolutions were taken and we are absolutely in total support of the legitimate, constitutionally guaranteed right if citizens to peacefully protest in any issue they feel strongly about.
"We are however not in support of any violent protest by anyone. We believe that the #EndSARS protest started very genuinely and those who started it are Patriots who wanted to see change and change was initiated immediately.
"The President himself, President Muhammadu Buhari gave a presidential speech in his remarks to say that SARS was disbanded. And of course, subsequently, five demands of the protesters were accepted by the government generally because we believe that those demands are legitimate and we will continue to insist that the Federal Government must implement those demands it accepted from the protesters.
"But we equally believe that the time has come for the protest to stop. This is necessary for the government to be able to implement those demands that it accepted from the protesters.
Also in attendance were: Deputy Senate president, Ovie OmO-Agege, Senate Leader Yahaya A. Abdullahi, Chief Whip of the Senate, Orji U Kalu, Deputy Senate Leader, Prof. Robert A. Boroffice, Senate Minority Whip, Philip T. Aduda, Senate Chairman on National Security And Intelligence, Ibrahim Gobir, Senate chairman Police Affairs, Halliru Jika.
News